I’m in my final hours in Australia, feeling both nervous and excited about my next destination, but that’s another post altogether.

This post is more about saying “Hooroo!” (goodbye) to Australia.  It’s the first country I’ve been to on this journey that I’ve felt thoroughly ready to leave.  I definitely did not want to leave India, and I was heartbroken upon leaving Southeast Asia.  But Australia just didn’t affect me in the same way and I’ll be heading to the airport tomorrow with a smile on my face.  Don’t get me wrong.  I’m not writing off the entire country.  I’d love to return some day and see more than just Melbourne, Sydney, and the surrounding areas.  But Aus just did not fill my soul and challenge my mind the way that Asia did.  I’ve given it a lot of thought, and I’ve come up with a few reasons why I think Australia didn’t capture my heart in the same way as Asia.

I have now stayed in three different hostels in Sydney.  Because of Australia’s yearlong working visa, most people staying in the hostels are what they call “long-termers”: kids in their early 20s who are staying for a few months in each city, working part-time jobs, and basically living in the hostels.  This makes for a highly unpleasant hosteling experience if you are, like me, not staying long term and also not 22 years old.  They take over the rooms with all their junk and they are usually part of cliques with the other long-termers.  They act like they own the place and can be extremely loud, rude, and exclusive.  Carrie and I left the first hostel after one night because of the obnoxious, screaming British girls who were arguing about who could roll a better joint in the hallway outside our room at 3:30am.  I stayed in dozens of hostels in SE Asia and never had to deal with that kind of disrespectful behavior from my roommates.  At the second hostel I stayed in, approximately 70% of the floor of my assigned room was covered in suitcases, dirty clothes, books, shoes, and other gadgets belonging to the long-termers in my room.  My bed was the farthest one from the door, so I had to hop-scotch my way around everyone’s stuff every time I went to or from my bed. I’m currently in the third hostel and it’s definitely the best fit for me, even though it’s also the most expensive one I’ve ever stayed it.  I guess you get what you pay for.  This one is the Sydney Central YHA.  It is a nine-story building with dozens of rooms and probably a few hundred beds.  It’s more like a hotel with dorm-style rooms and organized social activities.  Most travelers staying here seem to be traveling solo and they are all ages.  I just saw two women picking out books from the free library who were at least 70 years old.  This hostel also offers private rooms, but they’re nearly $100/night.  Last night was my first night here and I was one of the last people in my room to go to bed… at 11pm.  It was awesome.

4.  CULTURE:  Australia might be in the East (or is it west? It’s all relative, isn’t it), but it is fully a “western” country when it comes to society and culture.  Walking down the streets, eating in the restaurants, sitting on the busses, it’s easy to forget that I’m not in the States.  As a matter of fact, I have to remind myself daily that I’m NOT in Seattle or Vancouver.  And as much as I adore the Pacific Northwest, it’s not very exciting.  In Asia, I loved the novelty of being in a place that was so different than my home country.  I also appreciated the challenges of not speaking the language.  Nothing was ever easy so I always had to be awake, alert, alive.  Here, I can just roam around and switch off my mind… it’s too easy.  I find it boring. Perhaps if I had started my trip in Australia, I would have loved it.  But coming here from Asia leaves me wanting more… More of the unfamiliar, the unknown, the unique.  Australia may have a lot to offer in terms of natural beauty, but in terms of cultural richness, not so much.  Maybe I haven’t been here long enough to give it a fair chance, but Aus just doesn’t move me. I wanted to LOVE it, but instead I just like it as a friend.

5.  WEATHER:  Lastly, winter time is not the best time to be here.  Everything I’ve done so far would be better with warmer weather.  Some day, when I return to Aus, it will be in the spring.  Enough said about that.

Now, I don’t want to end on such a negative note, so now I’m going to list what I liked most about Australia, in no particular order:

1.  THE COAST:  There’s a reason why all of Australia’s major cities lie along the coastline:  It’s beautiful!
2. THE PEOPLE:  People living in Australia, whether they’re Aussie or another nationality, are all so nice and helpful (with the exception of the longterm d-bags in the hostels).  If you stop someone on the street to ask directions, you can expect a friendly answer that might just turn into a 5-minute conversation that starts with, “Where are you from?”
3.  THE FOOD:  Oh my god, the food.  It’s all so good.  I haven’t had a bad meal here.  And every restaurant offers vegetarian food, no questions asked.  And it’s usually a good selection, too, not just a salad!
4.  BYO BOOZE:  Apparently most restaurants in Australia allow you to bring your own wine, beer, and occasionally liquor to the table, even if they serve alcohol.  Some charge a corking fee, but it’s usually minimal and still cheaper than buying a booze at the restaurant.  Carrie and I took advantage of this several times, as it’s a awesome perk to dining out.
5.  THE ANIMALS:  Australia has some of the coolest and weirdest animals in the world.  Most notably, the exotic-looking birds.  Giant parrots, cockatoos, and other big, strange birds just roam the skies and the streets like pigeons.  It’s pretty cool.  Then there’s the chance of just running onto (or INTO if you’re driving a car) a kangaroo, wallaby, or wombat.  Now that’s pretty sweet.
6.  TAP WATER:  I gotta admit… In India and SE Asia I sure did miss drinking tap water.  I hated buying bottled water all the time.  In Australia, water fountains are everywhere.  I have had the same bottle for the past nine days that I just keep refilling.  So much better for the environment and for my bank account.
Here are few photos of these things I liked best:

THE FOOD:  The Ora Bowl at Ora in Manly Beach

THE FOOD: Veg thali! I’ve had Indian food in every country on this trip 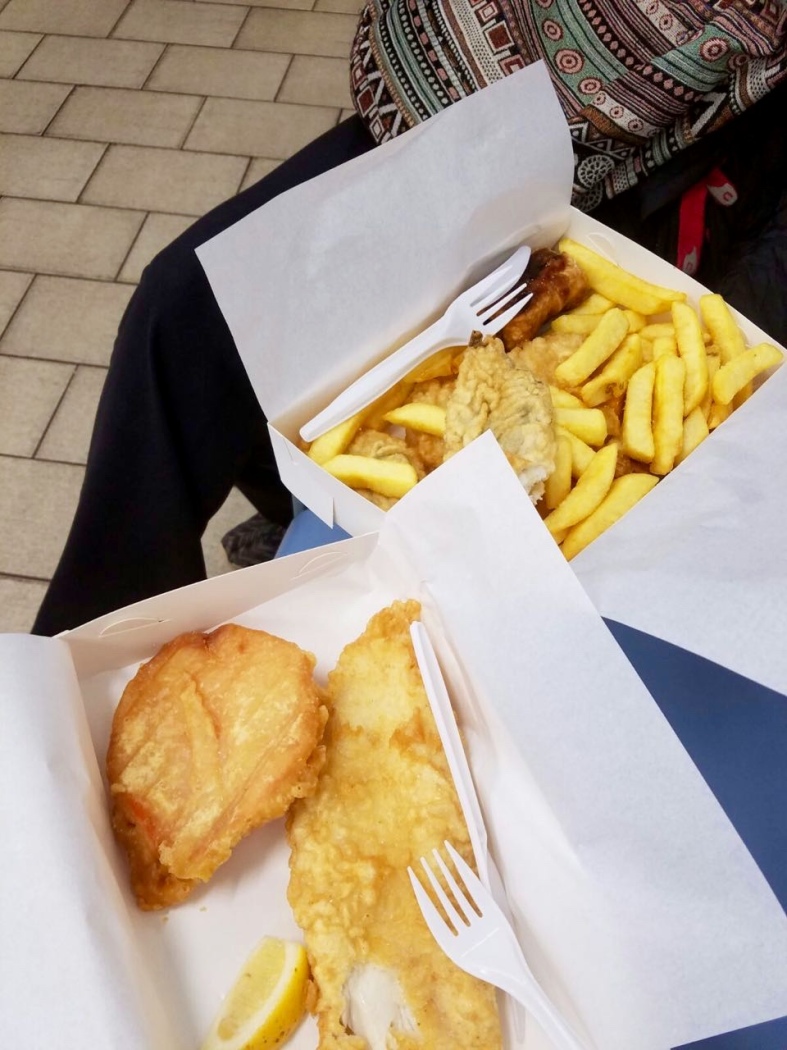 THE FOOD: Fish’n’chips… Had to eat it along the coast 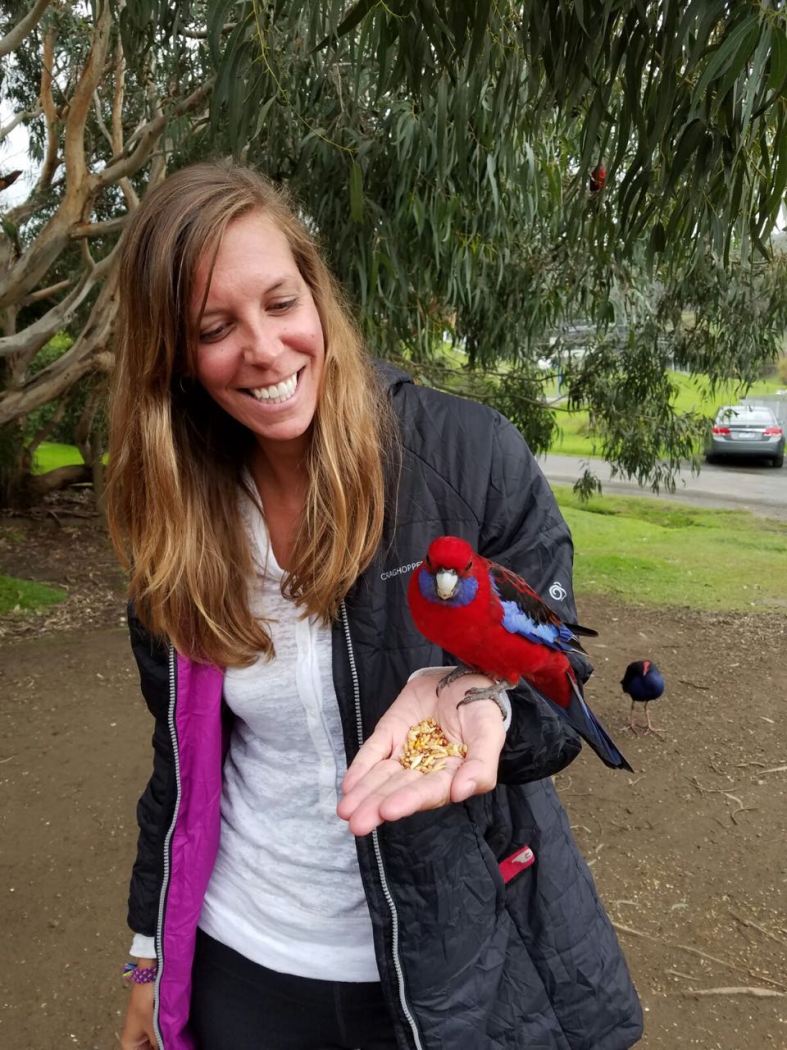 Loved all the cool birds! 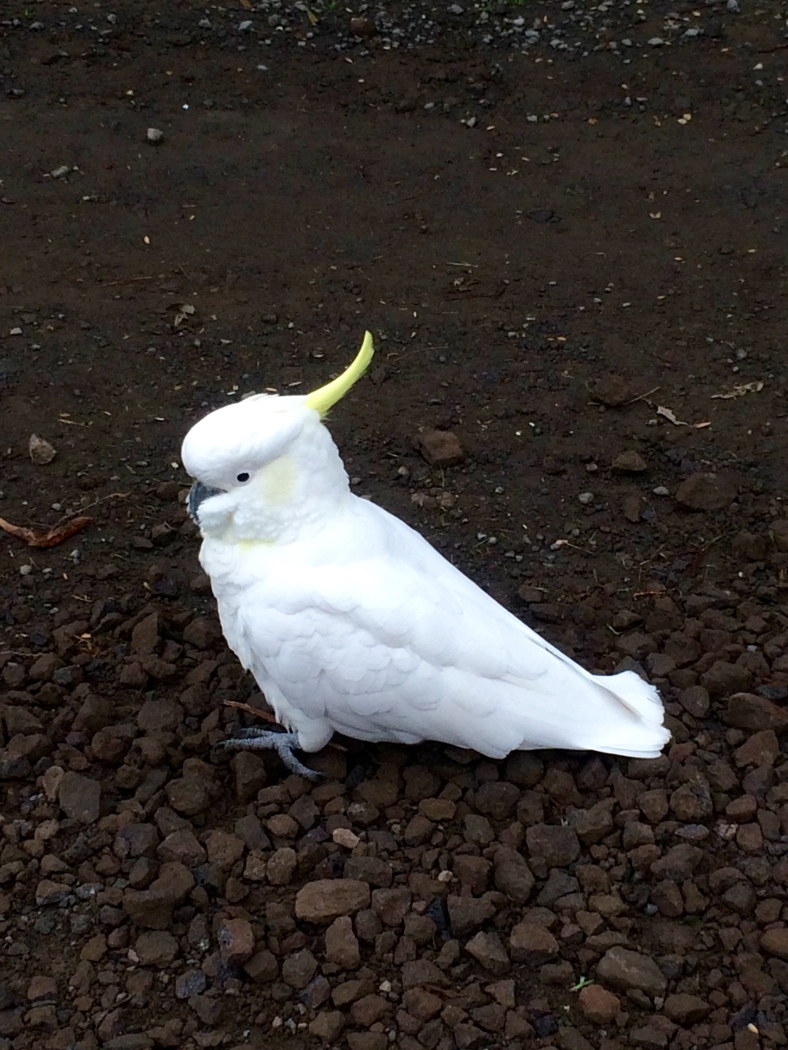 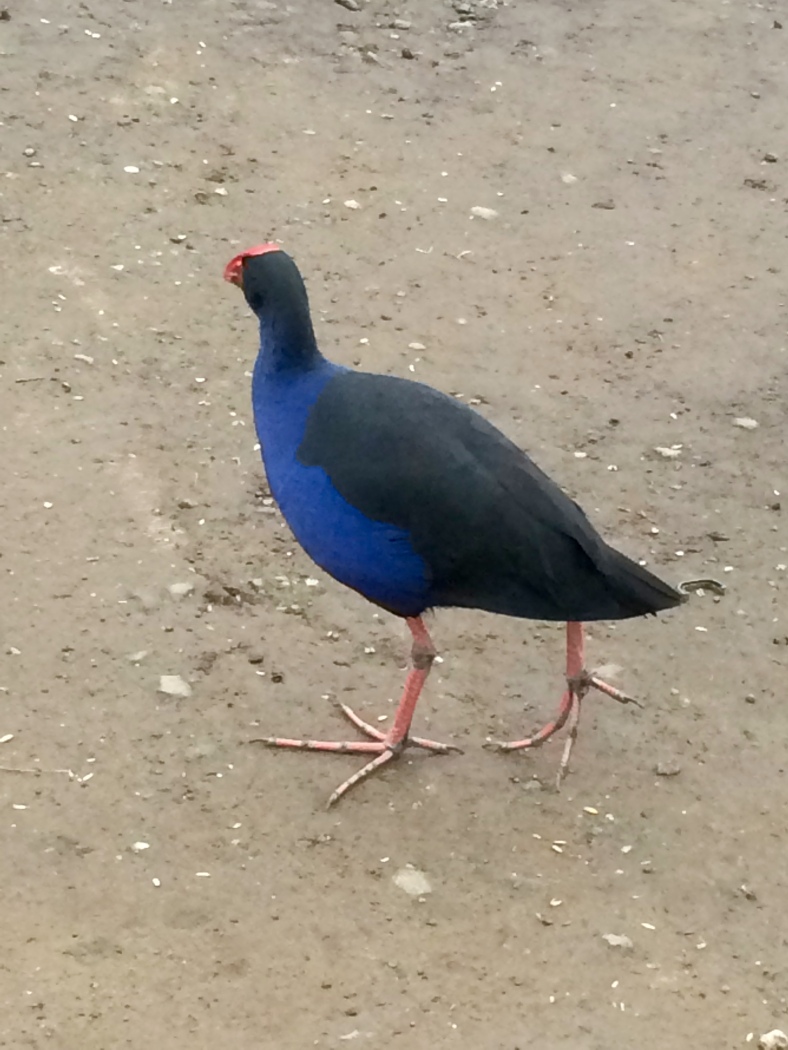 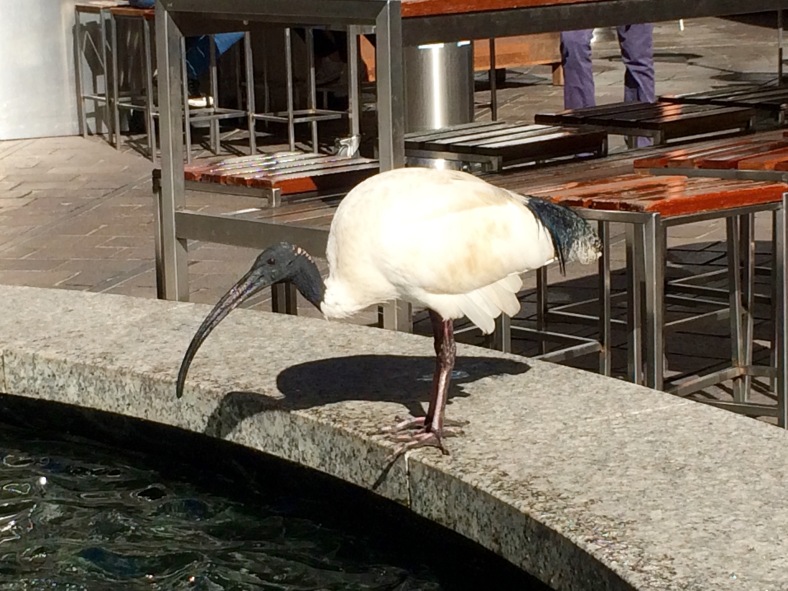 What IS this thing??? 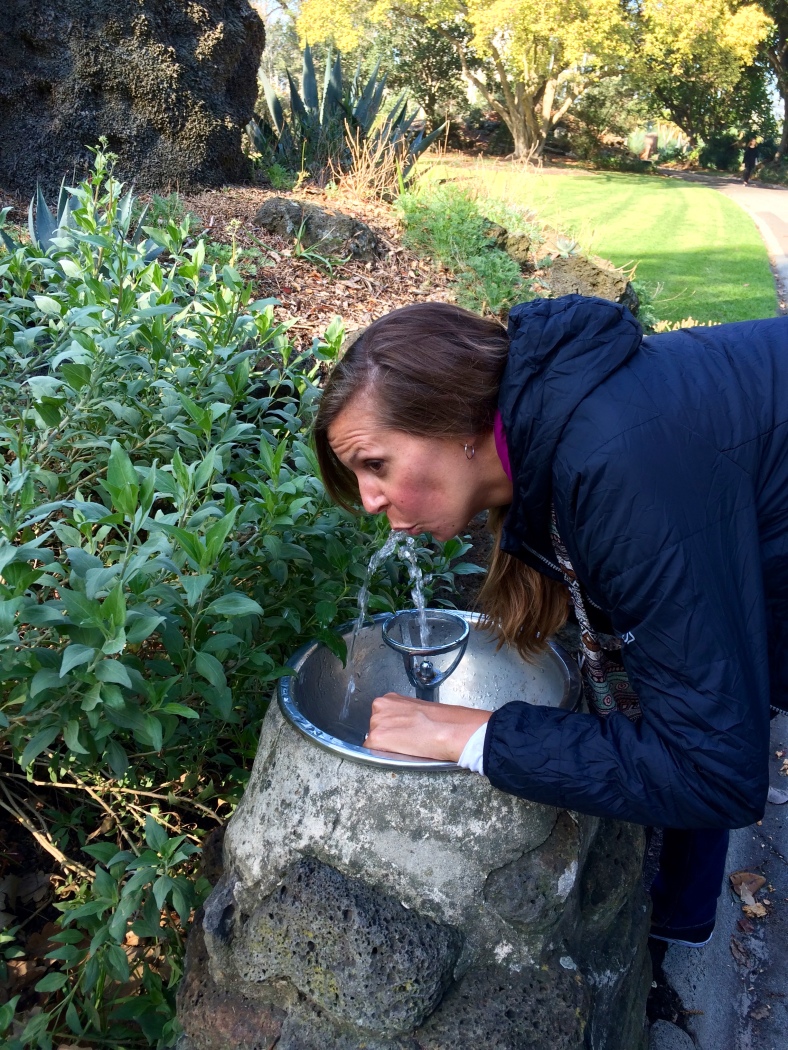 One thought on “Hooroo, ‘Straya”

Follow The World Is My Boyfriend on WordPress.com
Join 923 other subscribers