Exactly one year and 10 days ago I arrived in Valparaíso, Chile with only the backpack on my back… to live here… for an undetermined amount of time.  I didn’t know a single person here.  I was nervous and excited, doubtful and hopeful, all at the same time.  It was a bizarre mix of feelings.

To say that I was ill-prepared, both emotionally and physically, for the next six months is an understatement.  I had done approximately seven hours of research about being an ex-pat in Chile and read one guide about living in Chile.  I didn’t exactly expect it to be easy, but I also had no idea how difficult it was going to be either.  On top of that, I arrived with my backpack full of the clothes I had just been wearing for six months in India and Southeast Asia (re: hot weather).  It was the beginning of winter in Chile.  Winter in Chile is cold. And I had one pair of jeans, one jacket, and one pair of close-toed shoes.  Oops.  First on my list of things to do in Chile:  Have my mom send me a box full of my winter clothes. 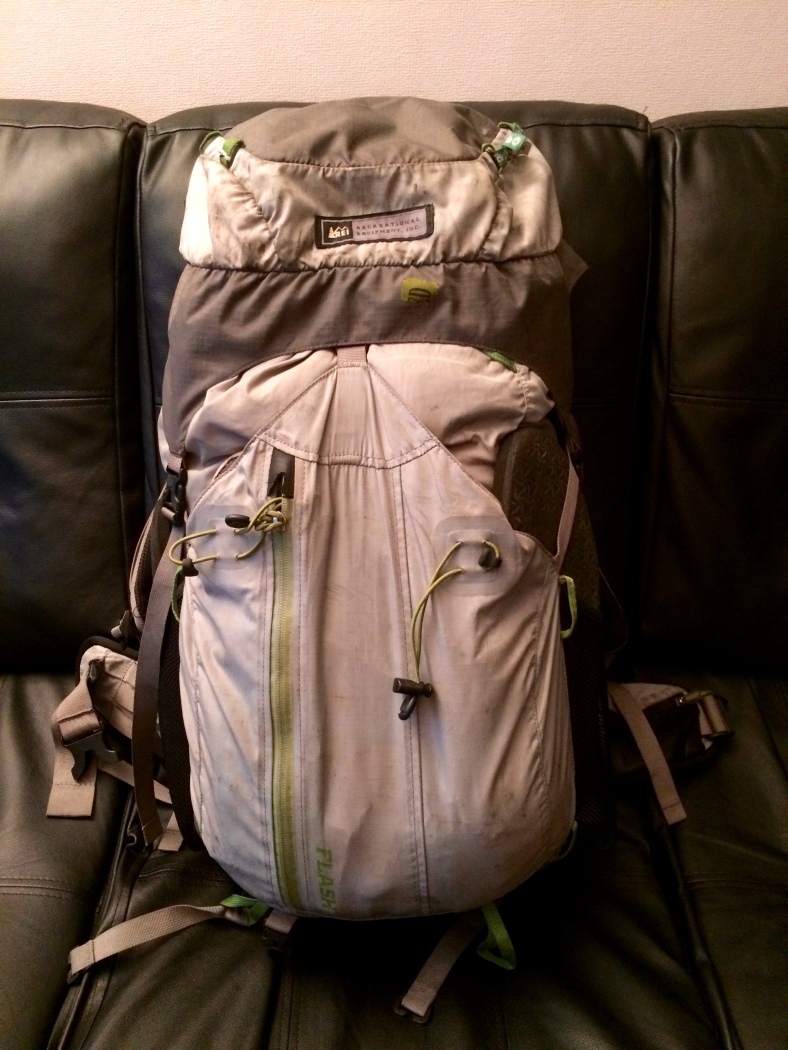 Everything I moved to Chile with was in this bag.

I would say that my first few months of living in Chile were mostly good.  I had decided to go easy on myself and focus my time and energy on “getting settled” and making friends. I was still in travel mode.  Aside from several interviews with a financial research company, I really didn’t make any effort to find a job (wrongly assuming it would be an easy task).  I quickly made a group of friends. Actually, my very first night here I went to a Couchsurfing event and met three awesome people who are now some of my closest friends here.  Through them, I met a lot more people, including an amazing guy who was my anchor for the first several months here.  I went out a lot.  I acclimatized myself to Chile’s party culture: pre-party from 10pm-2am, go out to a bar or club from 2am-6am, go home and sleep all day.  Wash. Rinse. Repeat.  I went to a lot of “asados” (BBQs) and drank a lot of pisco.  I learned where to buy produce (NOT at the grocery store) and toilet paper (also NOT at the grocery store).  I moved from one apartment to another.  I went to events and meet-ups.  I joined every Facebook group for locals and gringos in the area.  I tried to join clubs.  I went to yoga classes regularly and dance classes irregularly.  I went to plays and concerts and protests and marches.  I said “yes” to everything.  This might sounds like a lot, but after three months, it wasn’t enough.

Some of my first and most special friends in Chile

Some of my first and most special friends in Chile

I was idle.  Idleness breeds laziness which, I learned, breeds more idleness, until you’re caught up in a vicious cycle of doing a lot of nothing.  Or at least a lot of nothing productive.  After three months of this lifestyle, I became very depressed.  I felt like I had no purpose.  I didn’t understand what I was doing (and not doing).  I started having anxiety attacks first thing in the morning (or afternoon) when I woke up.  I would cry or feel paralyzed or terrified and have to call my mother or a friend.  I started jogging because it seemed like the only thing I could do to get myself out of bed, and getting out of bed was the only way to stop the panic attacks.  I created lists of things to do: look for a job, write a blog post, apply for a visa, talk to so-and-so, update resume, go here-and-there-and-there-and-here to drop off resume, look into this lead, etc.  But I couldn’t bring myself to actually DO any of it.  If you don’t personally know me, you might think I’m an unmotivated or lazy person, but I’m not.  This is what happens when you’re in the grips of anxiety and depression, only I didn’t realize it at the time.  I was confused by my own behavior.  I loved writing my blog… why couldn’t I write?  I needed to get a job and make some money… so why wasn’t I doing anything to make that happen?!  It was an awful feeling.

Also within these three months, both of my dogs died and my relationship with the amazing guy became rocky and then ended altogether.  These events didn’t help.

Eventually, I started thinking about, and then talking about, leaving Chile.  My goal had been to live here for a minimum of one year.  At four months I was about ready to give up.  Texts to my friends and family started to look like this:

October 20, 2016: Text to Colorado friends – “If you ever want to instantly stop crying, look at yourself in the mirror mid-sob.  That will do the trick.”

Same day, same friend – “I feel like everything in my life is on pause.  Like I’m not moving forward.  I don’t have a career, a love life, or even friends that are special to me.  I woke up this morning and realized that I don’t truly CARE about anyone here, and I don’t think anyone truly cares about me (except my friend Sebastian in Stgo).  All my relationships here are superficial.  And living here certainly hasn’t helped me figure out what I want to do with my life career-wise.”

December 4, 2016:  Text to friend – “I feel like after 5 months here I shouldn’t still have so many insecurities and doubts.”

December 8, 2016:  Text to friend – “Lately I just feel like such a loser and I get really negative about myself.”

Note: I’m normally a pretty confident woman, so looking back on these texts is kind of shocking to me.  But I know that’s how I genuinely felt at the time.

At this point, I was actively looking for a job.  I was spending hours online searching websites and uploading my resume to various job sites.  Every week, I was walking around Valparaíso and Viña dropping off my resume at English institutes, restaurants, and hotels.  I got a couple of leads and had a couple of interviews, but it always ended like this:  “Do you have a job visa yet?” “No.”  “Okay, thanks for your time.”  Here in Chile, if you don’t have a job contract, you can’t get a work visa.  But if you don’t have a work visa, it’s very difficult to find a legitimate job that pays more than $2/hour.  It’s surprisingly hard to find a company that will provide you with a job contract.  I was advised to move to Santiago, that “all the jobs are there.”  But I really did not want to live in Santiago (see my blog post about Santiago for reasons why).  So for me, my options were: Find a job in Valpo OR leave Chile.  I even set a date.  If I didn’t have a job offer by January 4th, I was going to leave.  Back-up plan A: Colombia.  Back-up plan B: Vietnam with a 3-month stopover in India on the way.

Dear God, Make me a bird, so I can fly far, far far away from here

And then, guess what happened? On December 15th I was offered a job as an English teacher at the Chilean Naval academy.  I remember feeling very relieved, but not excited.    I felt like I should be excited, but I just wasn’t.  Maybe there was just so much negativity built up inside me at that point that it was blocking all the joy.

Of course I accepted the job offer.  However, the job wasn’t to start until February 1st, 2017.  So, that left me with 6 more weeks of nothing to do.  Feeling boosted by the idea of purpose returning to my life and relieved by the thought of receiving a pay check for the first time in more than a year, I made a plan.  I would spend Christmas with my friends in Chile (who I realized really DO care about me and I really DO care about them), and then I would travel to Argentina for three weeks, returning with one more week of freedom before starting work at the academy.

I went to Argentina on January 2, 2017 and the most miraculous, amazing, SHOCKING thing happened.  I became homesick… for CHILE.  After three weeks in Argentina, I couldn’t wait to come home…. home… home to CHILE.  For the first time in six months, I thought of Chile as home.  I was so ready to return that I changed my bus ticket to come back ONE DAY EARLIER.  Thinking about it now makes me laugh.  I even had to pay a fee to change the ticket, but I was willing to do it because I desperately wanted to be back HOME…. in CHILE.  It was the most unexpected feeling, and it felt so gooooooood. 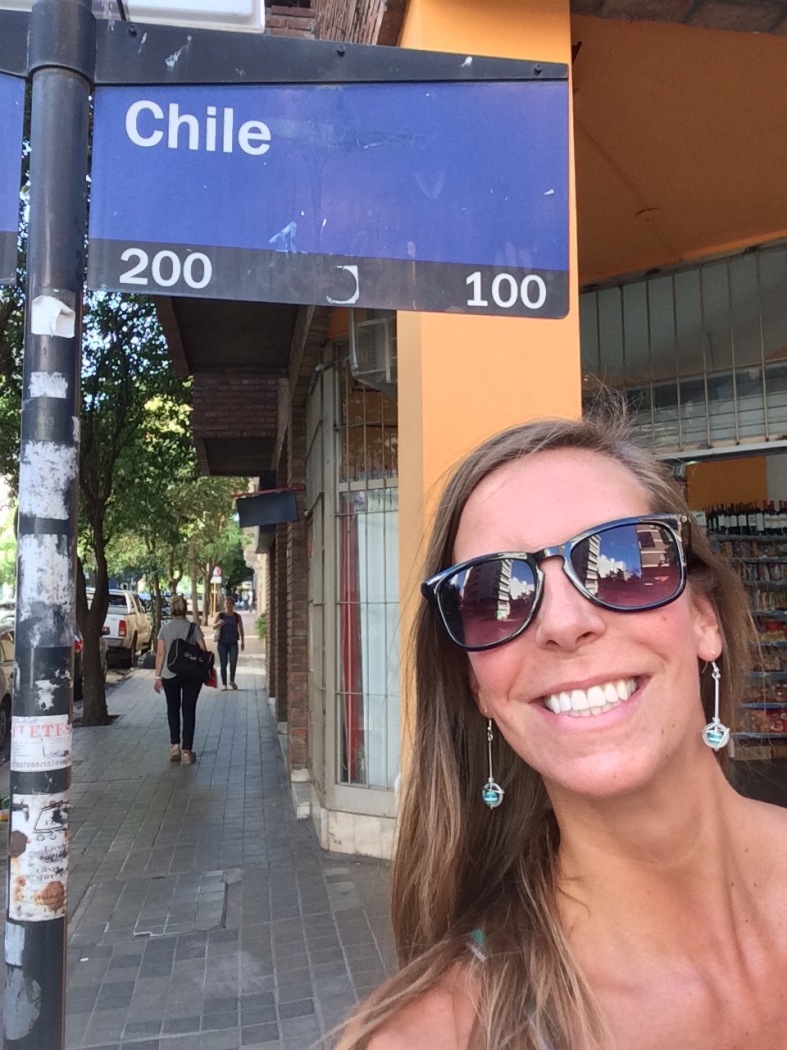 Funny thing is, I snapped this selfie while in Argentina

To wrap up this excessively long post, I came home, started working at the Navy School (which I really enjoy), made even more friends (who I genuinely care about), settled into a routine (which I obviously needed), found some purpose in my days, and have never had another moment of panic, anxiety, or depression.  I’m extremely happy these days.  So much so that I’m pretty certain I’ll stay here through 2018, and then… who knows?

I don’t think there’s some kind of “Never give up” moral to this story.  Things just happened to work out for me.  Moving abroad definitely isn’t for everybody.  It’s freaking hard sometimes.  But I’m so glad I did it and I’m so thankful to still be here… at home… in Chile.

Elevate the world, Make it beautiful, And when you have gone, Leave it so that the earth misses you. (Valpo street art)

From Caldera, Ryan and I took a bus down to La Serena, which means “serene” in English. I liked La Serena right from the start.  It is a charming, well-organized city with beautiful colonial architecture, a metropolitan downtown, and a long, golden beach.  However, just like most beach towns in Chile in June, it was sleeeeeeepy.  Apparently the place triples in population during the summer months of December, January, and February.  But in late June, just about every apartment had a “For rent” or “For sale” sign in the window, especially in the buildings along the coast.

END_OF_DOCUMENT_TOKEN_TO_BE_REPLACED

I’m in my final hours in Australia, feeling both nervous and excited about my next destination, but that’s another post altogether.

This post is more about saying “Hooroo!” (goodbye) to Australia.  It’s the first country I’ve been to on this journey that I’ve felt thoroughly ready to leave.  I definitely did not want to leave India, and I was heartbroken upon leaving Southeast Asia.  But Australia just didn’t affect me in the same way and I’ll be heading to the airport tomorrow with a smile on my face.  Don’t get me wrong.  I’m not writing off the entire country.  I’d love to return some day and see more than just Melbourne, Sydney, and the surrounding areas.  But Aus just did not fill my soul and challenge my mind the way that Asia did.  I’ve given it a lot of thought, and I’ve come up with a few reasons why I think Australia didn’t capture my heart in the same way as Asia.