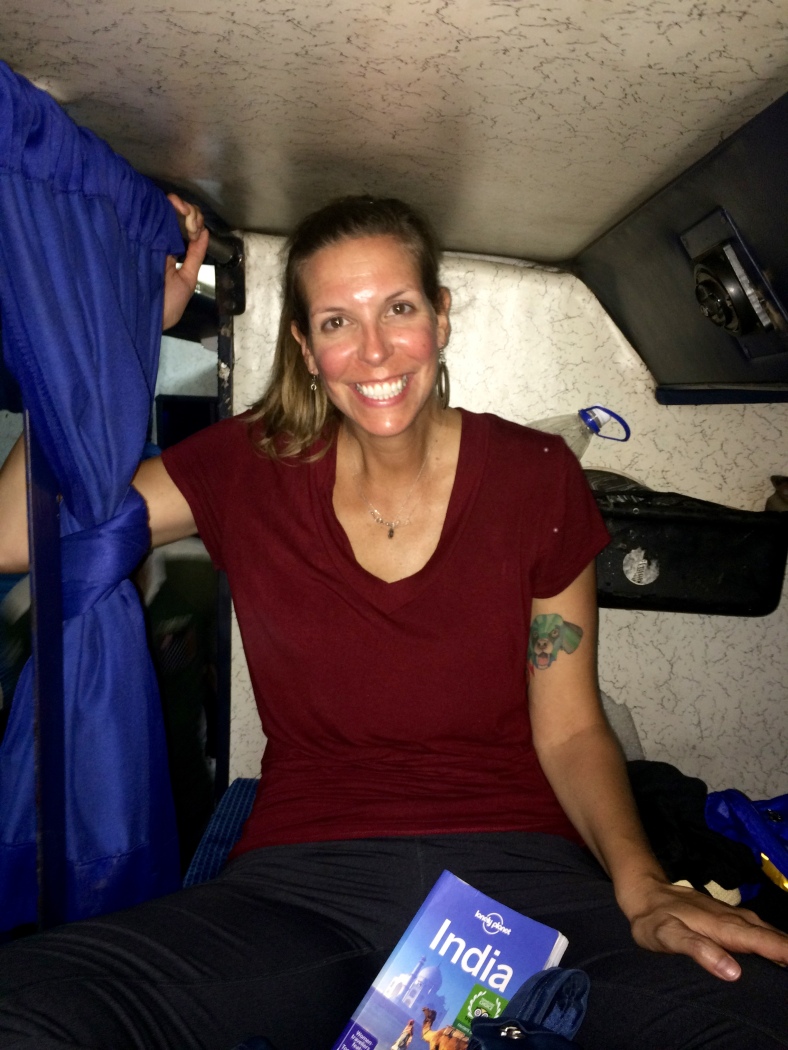 To get from Goa to Hampi, Karnataka, we took an overnight sleeper bus that left Panjim around 9:00pm and arrived in Hampi around 8:00am.  We had no idea what to expect from the overnight bus, so what we got was quite a unique experience.

END_OF_DOCUMENT_TOKEN_TO_BE_REPLACED 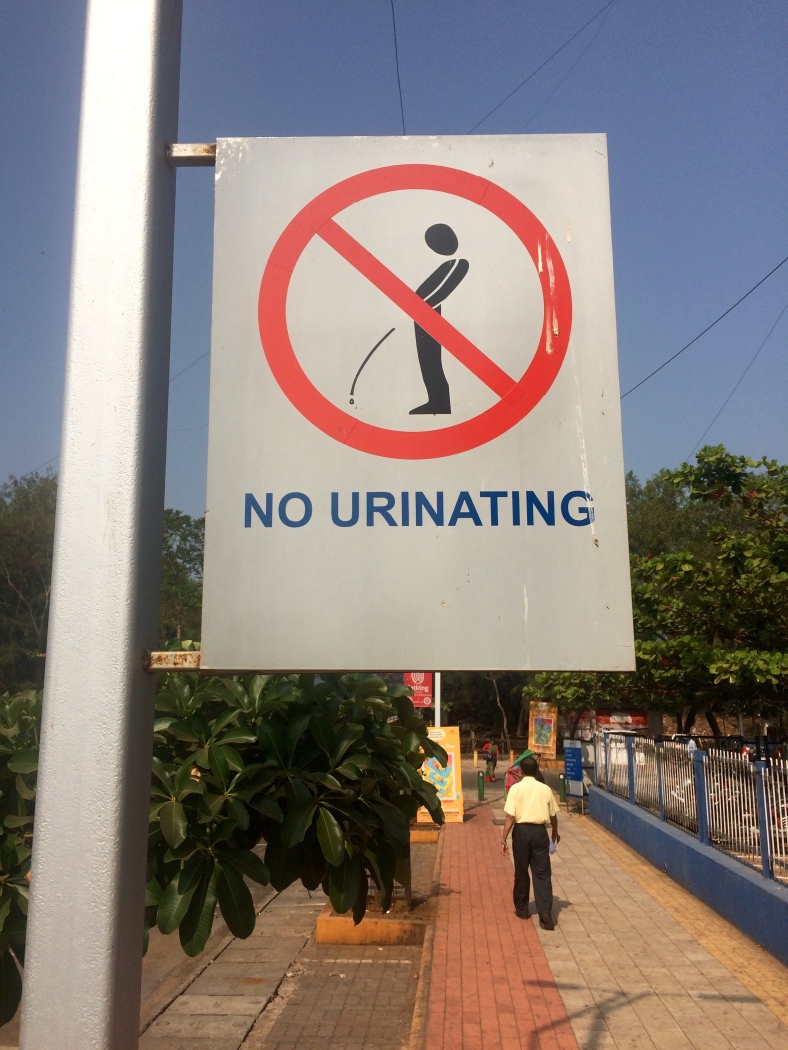 END_OF_DOCUMENT_TOKEN_TO_BE_REPLACED

Panjim has a few very beautiful temples. The Hanuman temple, a gorgeously vibrant orange building, was a 10-minute walk from our hotel, so we wandered up there one morning.

END_OF_DOCUMENT_TOKEN_TO_BE_REPLACED

Panjim: Goa’s capital city
Our first (and lasting) impression of Panjim was that we loved it. We have deemed it our favorite place so far on the trip, even despite me being laid up for an entire day.

END_OF_DOCUMENT_TOKEN_TO_BE_REPLACED

Like Loading...
Actually it was more of a shart. And I was wearing my bathing suit, not pants. But you get the idea.

END_OF_DOCUMENT_TOKEN_TO_BE_REPLACED

The Goan beaches are popular hotspots for yoga and ayurvedic medicine.  I figured while I was in Palolem, I should get an ayurvedic massage, which I read you could find for about $8.  So, I followed the signs for an “ayurvedic massage spa” and found a hut near the  beach.  Outside the hut, I met one of the female masseuses, an Indian woman in her 50s. I told her a wanted a full body massage and asked about prices.  She told me in a whisper that she would give me a discount and showed me a menu of services.  While I was looking it over, she whispered again something about price and discount, but then said her boss was coming and she quickly scooted back into the hut.

END_OF_DOCUMENT_TOKEN_TO_BE_REPLACED

Goa: A place to do nothing

We arrived in Goa on Jan. 14th after a one-hour flight from Mumbai.  We could have taken a train for half the price, but it would have taken 9 hours.  We opted for the “time is money” approach and flew here instead.
A lot of people refer to Goa like it is a city, but in fact it is a very, very small state.  India’s smallest.  In Goa, we have been staying in Palolem Beach, which is in south Goa.
First impressions of Palolem were: cute, small, hippie, touristy, relaxing.

END_OF_DOCUMENT_TOKEN_TO_BE_REPLACED

On the day we left Mumbai, we decided to visit one of the city’s most famous and popular temples:  The Mahalaxmi Temple.  This temple was built around 1800 and is dedicated to the goddess Mahalaxmi (or Mahalakshmi), wife Vishnu and goddess of wealth and prosperity.

END_OF_DOCUMENT_TOKEN_TO_BE_REPLACED

Another thing that Maren and I did in Mumbai was visit the Chhatrapati Shivaji Maharaj Vastu Sangrahalaya Museum (formerly, and more easily, known as the Prince of Wales Museum).  The museum is beautiful and massive, and you could easily spend a few days roaming its halls.  We, however, limited ourselves to a few hours and only two exhibits:  the famous miniature paintings exhibit, and a new exhibit about ancient and modern medicine in India.  Both were really superb.

Originally, these paintings were painted onto palm leaves in the 10th century, and later onto paper or cloth in the 14th century.  The paintings often depicted illustrations from religious texts, mythologies, portraits, poetry, and legends.  They are unique in their size and detail, each one with teeny tiny brush stokes using handmade paints.  Some tell elaborate stories on pieces of parchment that are only about 8 inches wide and 13 inches tall.  The museum had a collection of 200 of these paintings.  Here are a few examples (we were allowed to take pictures because we paid for it… everything has a price in India): 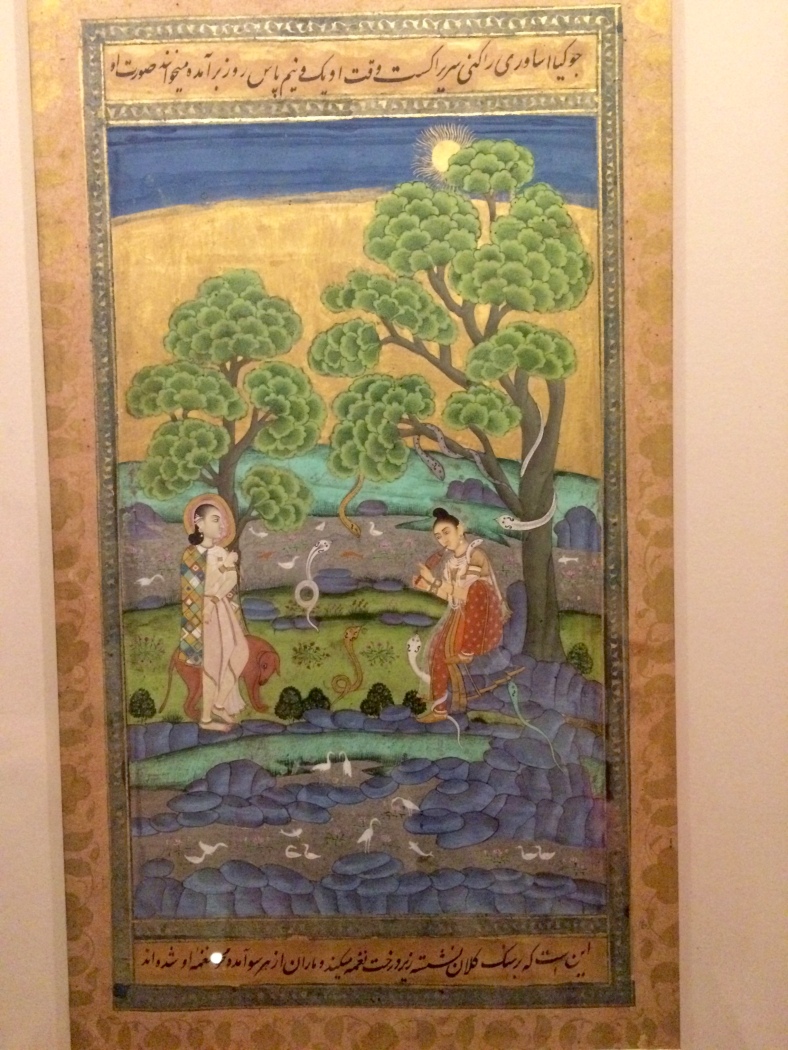 END_OF_DOCUMENT_TOKEN_TO_BE_REPLACED

For the past two days, Maren and I have been on our own, as our hosts have been at work.  Here is what we’ve been up to:

Yesterday morning we went to the horse race track with Sushim.  He goes there to run and he’s currently preparing for the Mumbai half marathon next weekend.  The horse race track doubles as a park & running track where tons of locals come to exercise early in the morning.  We watched the sun rise there.

This is a pre-dawn photo, followed by the sunrise.

This is horse racing season in India, so these jockeys were exercising their horses around the track.

Fortunately, we didn’t see any horses get taken away in this horse ambulance.

These are the famous Dhobi ghats, the world’s largest open air laundry mat.  The washers are called Dhobis and they wash the laundry from Mumbai’s hospitals and hotels, as well as private homes.  Clothes are beaten clean, hung to dry, and pressed.  They say about half a million items are sent here each day.  The Dhobis and their families live at the ghats.

Since Mumbai is such a booming megalopolis, you don’t see too many street cows.  This was the first one we saw so I thought it was photo worthy.

These are Mumbai’s famous dabbawallas sorting meals for delivery.  The dabbawallas are a group of men (there are about 5,000 of them)  who pick up and deliver home-cooked meals to more than 350,000 office workers every work day.  They actually go to the workers house, pick up the meal in a tiffin (a tiered metal container) inside a reusable bag, and use an elaborate zoning system to make sure that every meal is delivered right on time to every employee that utilizes their services.  The meals are handed off to at least a dozen different dabbawallas before reaching their destination.  The dabbawallas use bicycles to deliver the meals.  We were lucky to catch them sorting the lunch bags completely by chance.

Our first train ride.  It was easy and in the middle of the day, so not crowded.

Indian’s version of the food truck: a food bus where you eat inside at tables.

We ate lunch at Leopold Cafe, which is famous because it was one of the target’s of the 2008 terrorist attack on Mumbai.  It is also frequently mentioned in the book Shantaram. The food was DELISH. 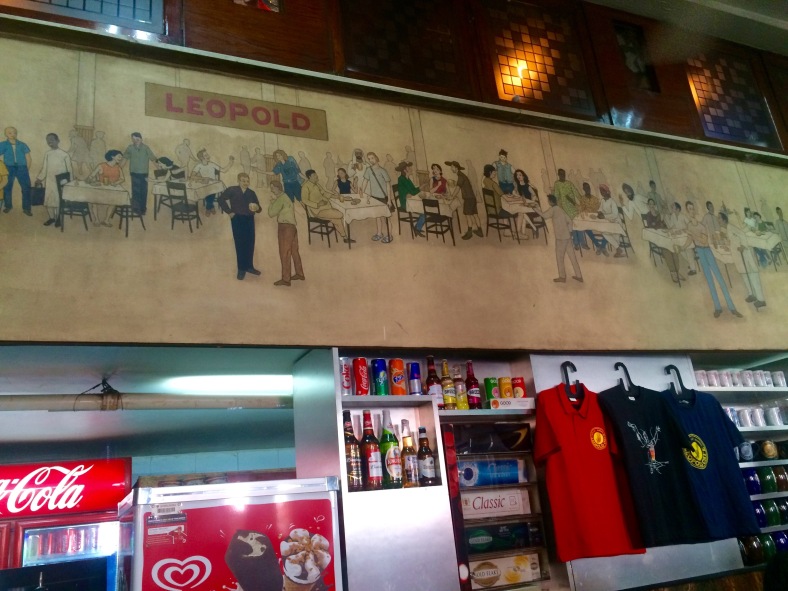 Had to get some kind of image to signal that Mumbai is the center of Bollywood.

These chilis and lime are often seen dangling from car grills.  It is said that they ward off evil and bad juju.

The Gateway to India

We took a ferry out to Elephanta Island.

Elephanta Island is home to many animals, like monkeys… 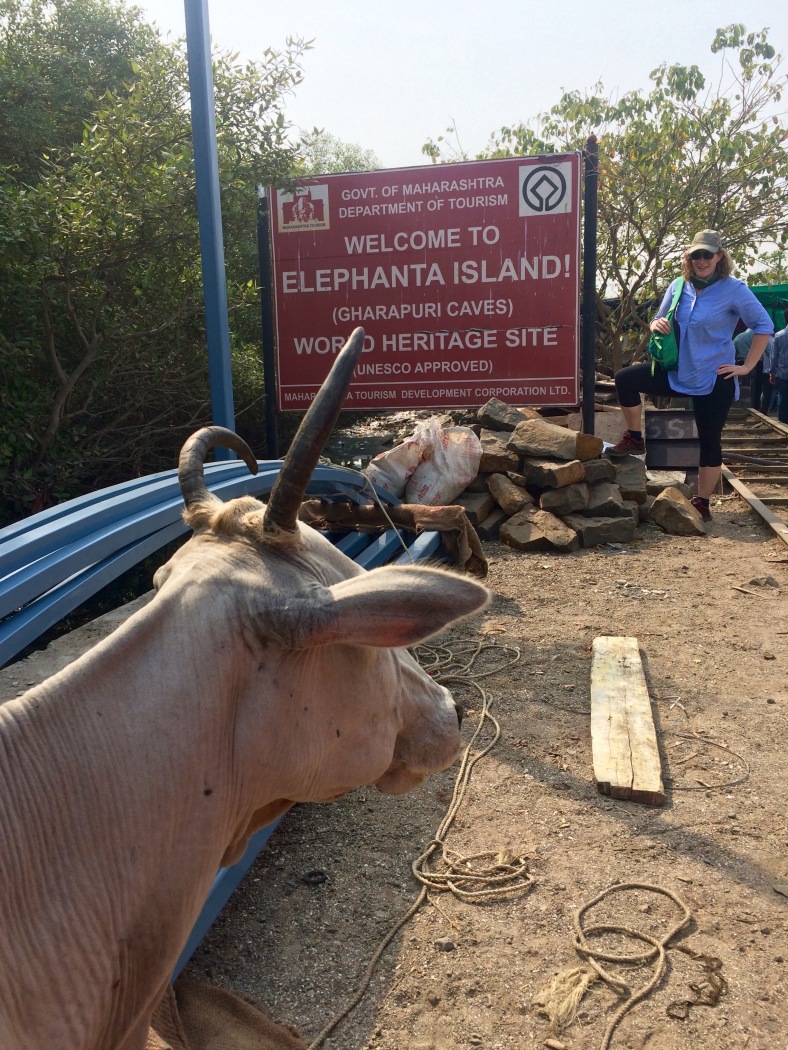 and PUPPIES!!!!!!!!!! (I gave this one and his friends some water and he started suckling my finger.  Now we’re bonded for life.)

A home on Elephanta Island

So, Elephanta Island is about an hour-long ferry ride off the coast of Mumbai.  It is a UNESCO World Heritage Site known for it’s cave temples that have been carved into rock. The temples are thought to have been carved between AD 450 and 750.  It is dedicated to Lord Shiva and has many carvings of him. 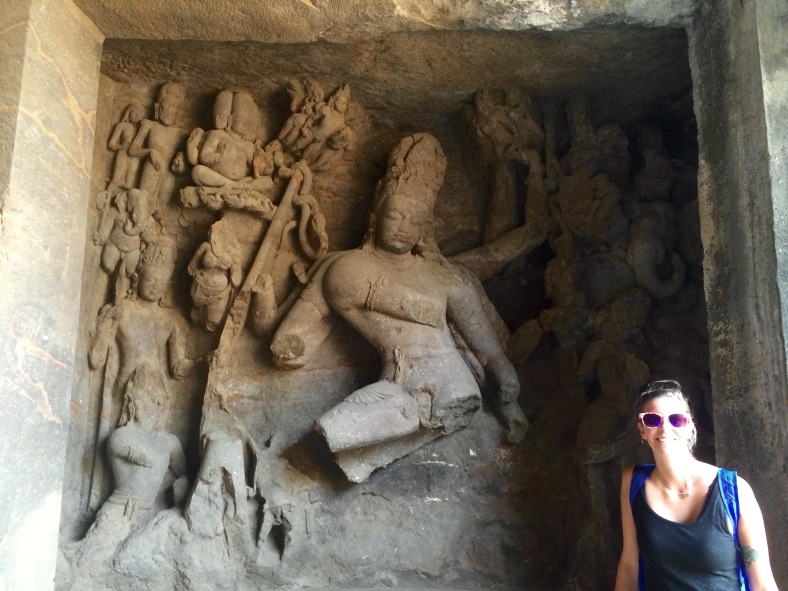 My first time using a squatty potty.  Is was a piece of cake, but am I doing it right?  I have no idea. 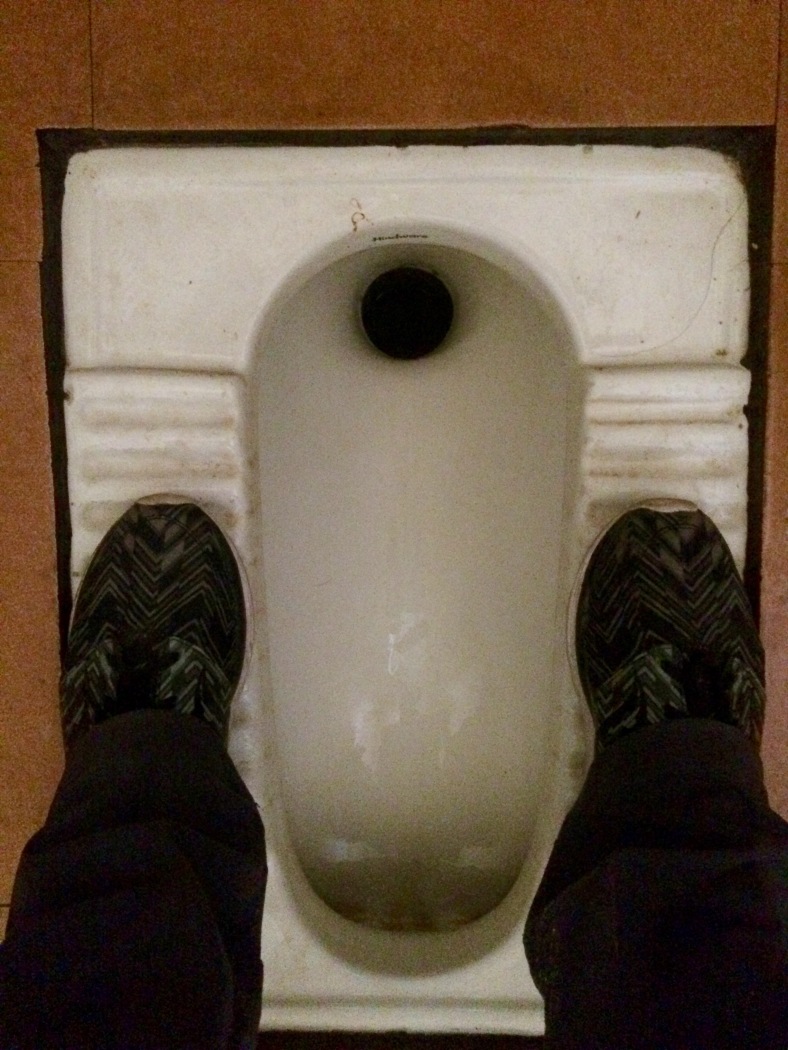 View of the Taj Mahal Palace Hotel and the Gateway of India from the ferry.

The Gateway of India: Mumbai’s #1 tourist attraction (sometimes referred to as Mumbai’s Taj Mahal); a monument built by the British to commemorate the arrival of King George V and Queen Mary when they visited India in 1911.

The Chhatrapati Shivaji Terminus (CST; formerly the Victoria Terminus) railway station.  This incredible building was built in 1887 and is one of India’s busiest train stations.  We were there at peak rush-hour and there were rivers of people pouring into this place.  It was beautiful chaos.

I have no idea what this building is, but I thought it was beautiful.  It’s across from the CST.

A beautiful mosque. About 20% of Mumbaikars are Muslim. Mumbai has incredible buildings like this around every corner.  Just walk the city and you will find them.

Our return train ride in the women’s only compartment.

Oops!  This one is out of order.  It’s a super posh mall called the Phoenix/Paladium.

The women-only train car… so lovely!

The Phoenix: A HUGE and upscale mall.  We ate dinner in a restaurant here and dropped over $100!  Not everything in India is cheap!  #worthit