“It’s better to kill an innocent by mistake then to spare an enemy by mistake.” – Pol Pot
Between 1975 and 1979 nearly a quarter of Cambodia’s population died in the Khmer Rouge genocide.  Led by a man nicknamed “Pol Pot”, the Khmer Rouge set out to create an agrarian society virtually overnight.  They forced people out of the cities and into the rural areas of Cambodia, forced them into slave labor, and executed thousands of men and women who were believed to be intellectuals, political leaders, religious believers, or minorities.  They also arrested and executed family members of their victims, known as “arrest by kinship.”  It is estimated that anywhere from 1.7 to 3 million (or 1 in 4) Cambodians died from malnutrition, disease, torture, and mass executions.  Religion and arts were forbidden.  Wearing glasses or speaking with an accent could get you arrested and murdered.

END_OF_DOCUMENT_TOKEN_TO_BE_REPLACED

Kampot, Cambodia rests along the Praek Tuek Chhu river in the southeast corner of the country.  While I was there, nights out consisted of quiet dinners and drinks in quiet restaurants.  Days consisted of sight-seeing at the bizarre-but-lovely Bokor National Park, and a very quick trip to Kep.  Bokor National Park is one of the weirdest tourist attractions I’ve ever seen.  At more than 1,000 meters above sea level, it is a former hill station where elite French expats came to escape the heat of Phnom Penh.  It was developed in the 1920s, but has long since been abandoned and now is nothing more than a dilapidated hotel, palace, and church.  However, a Chinese hotel conglomerate purchased most of the hill in 2007 and is currently building a massive complex of hotels, casinos, villas, golf courses, and waterparks.  There are also a few temples, shrines, and a giant statue of Yeay Mao (see photo and caption below for more info).  The views from the top of the hill, when not obstructed by clouds, are magnificent and well worth the drive up.

END_OF_DOCUMENT_TOKEN_TO_BE_REPLACED

In Otres Beach I found a completely legit message in a bottle.  I decided to take a walk on the beach one afternoon and spotted it in the sand right on the shoreline.  I was ECSTATIC.  I felt over the moon.  I mean, who finds a message in a bottle, like ever?!  It’s a thing of movies, music, and myths.  But I had my very own!  I could hardly believe it.  I didn’t even open it right away.  I took it back to my bungalow, took pictures of it, and talked about it for a while.  Finally, I opened it.  The note was wrapped in a 100 Riel note (Cambodian currency, worth less than three cents).

END_OF_DOCUMENT_TOKEN_TO_BE_REPLACED 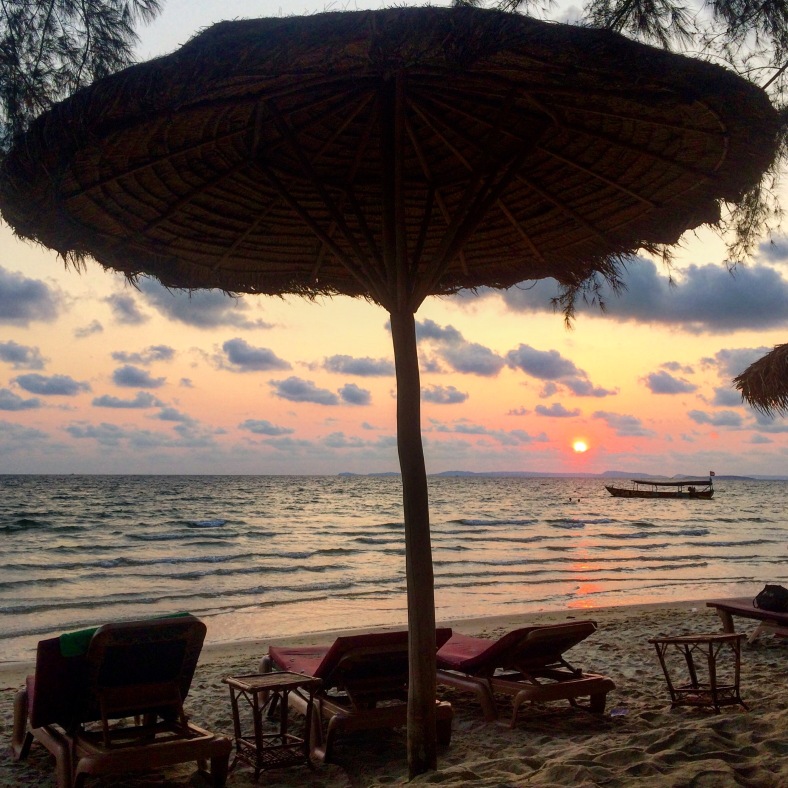 I spent my first 10 days in Cambodia on its beautiful, isolated beaches.  First I stayed on Koh Rong Samloem, a small island off the southern coast that is less touristy and less developed than its big brother, Koh Rong.  Then I stayed in Otres Beach, a gorgeous, chilled-out, unspoiled beach just east of Sihanoukville.  The water was warm and crystal clear.  The town of Otres consisted of one dirt road about half a mile long that was lined with beachfront bungalows and restaurants.  The towns were relaxing if you wanted to relax, but if you wanted to get funky, you could find a party.  Chill out by day, party by night… or just watch the stunning sunset, grab a glass of wine, and keep chillin’.  It was definitely the highlight of my 2.5 weeks in Cambodia.

END_OF_DOCUMENT_TOKEN_TO_BE_REPLACED

If you ever have an enemy that you want to torture, just secretly plant bedbugs in their bed and let them go to town.
Bedbugs (otherwise known as Satan’s Spawn) have some kind of anesthetic in their saliva so that you cannot feel it while they’re sucking your blood and stealing your soul.

END_OF_DOCUMENT_TOKEN_TO_BE_REPLACED 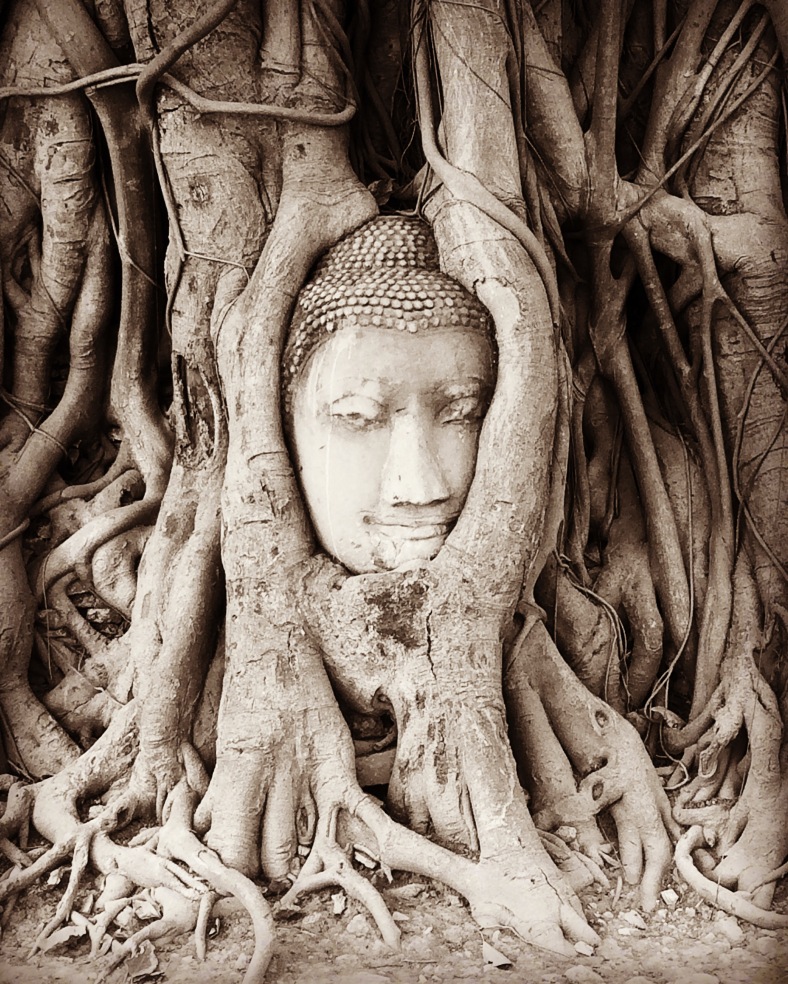 My ENP friends (Natalie and Lauren) and I decided to tear ourselves away from our beloved Pai to head down to Ayutthaya, where we thought we’d get a little history and culture in our lives.  Unfortunately, we got a lot more than that.

END_OF_DOCUMENT_TOKEN_TO_BE_REPLACED

After the week at Elephant Nature Park, I headed up to Pai in northwestern Thailand with three lovely ladies whom I befriended at ENP: Lauren and Natalie (cousins from CA) and Courtney (from Delaware).  We also met up with three other ENP friends while we were there.

END_OF_DOCUMENT_TOKEN_TO_BE_REPLACED

My first impression of Thailand after arriving here from India was… Wow, this place is TAME! And a bit boring! It’s also cleaner and more expensive.

I missed India a lot! I thought India was colorful, chaotic, and exciting. Thailand seemed so… vanilla, in comparison.

END_OF_DOCUMENT_TOKEN_TO_BE_REPLACED

Like Loading...
On March 11 I flew up to Chaing Mai from Bangkok on yet another ginormous plane (I was in row 72 and it had nine seats across!).  During the entirety of the two-hour flight I chatted with the girl next to me, Por.  Por is a Thai girl who married a British man when she was 17 years old.  He was 54.  They met online and he basically purchased her as his wife.  She said they chatted online for a few months before he came to Thailand to meet her and her family and make the marriage official.  After they got married, they moved to Dubai for the guy’s job. They lived there for seven years, but eventually moved to Thailand.  She has never been to his home country of England.  They have been married now for nine years and have three children together.  She told me that she is happy, that her decision to marry him was a good one because now she has a better life, and that she loves her children.  She showed me numerous pictures of them on her phone. She is now 26 and her husband is 63.
I’m glad she’s happy with her decision.  She had no reason to lie to me about her feelings; her hubby was not traveling with her.  But personally, I find the whole thing pretty gross.  But who am I to judge?

Many months ago, when I decided that Thailand would be included on my trip, I booked a week-long volunteering gig at Elephant Nature Park.  ENP is a brilliant organization in Northern Thailand founded by Lek Chailert.  Lek has made it her life goal to rescue and rehabilitate as many elephants (as well as dogs, cats, water buffalo, and monkeys) as she can from the tourism and logging industries in SE Asia.  She is an incredible woman who works extremely hard for animal and human rights.  She fights back against inhumane practices, educates locals about better ways to treat/train animals, and works closely with the Thai government to try to enact laws of protection for elephants.  When you hear her speak about these issues, you realize that Lek herself is the embodiment of love, strength, perseverance, and determination.  She is an inspiration to everyone who meets her.  She spoke to our group for about two hours one afternoon about the abuses that elephants face here in SE Asia, about the struggles she encounters when trying to fight against these abuses, about the slow but positives changes that are being made, and about how horrific animal tourism is.  For two days following her presentation, I would just burst into tears every time I thought about it.  I still, as I’m writing this, feel on the verge of tears.  But I’ll get more into the awful truth later.  For now, I’ll tell you about what is was like volunteering at ENP.