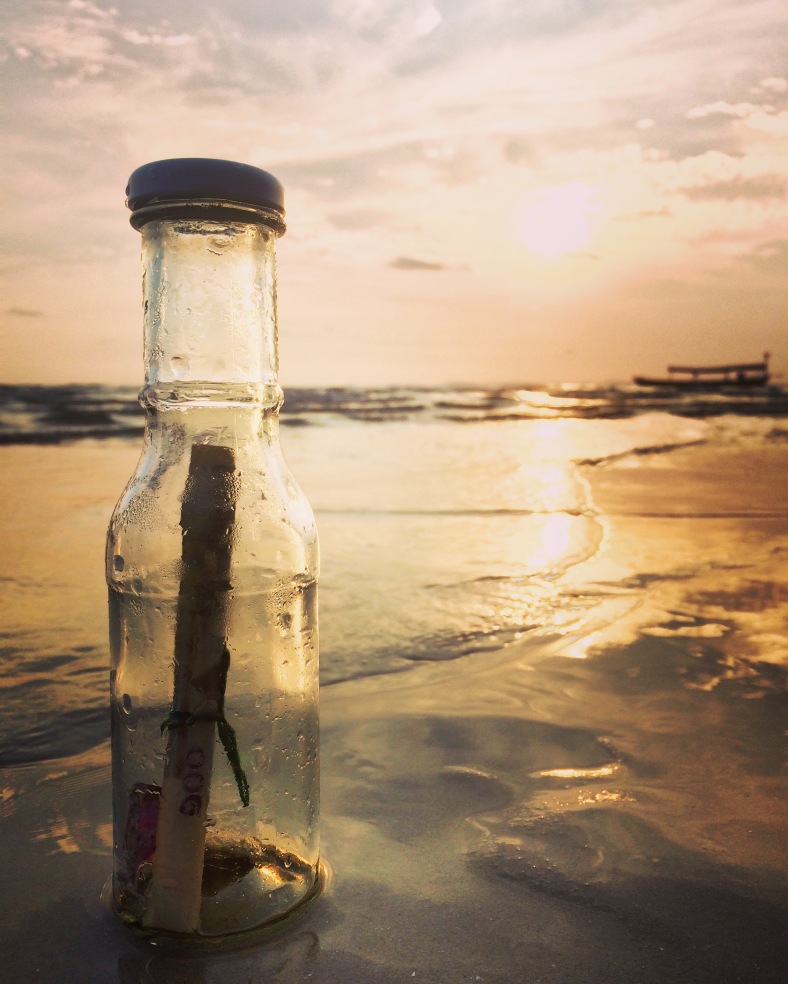 In Otres Beach I found a completely legit message in a bottle.  I decided to take a walk on the beach one afternoon and spotted it in the sand right on the shoreline.  I was ECSTATIC.  I felt over the moon.  I mean, who finds a message in a bottle, like ever?!  It’s a thing of movies, music, and myths.  But I had my very own!  I could hardly believe it.  I didn’t even open it right away.  I took it back to my bungalow, took pictures of it, and talked about it for a while.  Finally, I opened it.  The note was wrapped in a 100 Riel note (Cambodian currency, worth less than three cents). 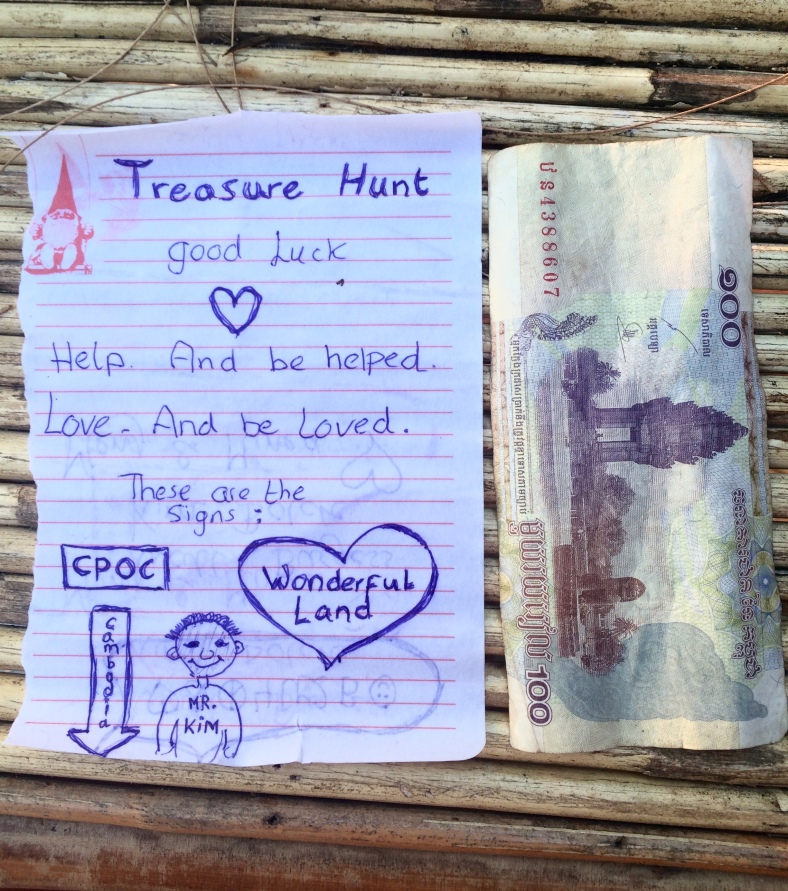 I was intrigued.  I immediately Googled “CPOC Wonderfuland Mr. Kim” and quickly solved the riddle.  CPOC stands for Caring for Poor and Orphaned Children, and is a program that helps local children in poor rural areas outside of Phnom Penh by providing them with shelter, education, food, and mentoring.  Mr. Kim is the founder.  “Wonderful Land” is one of three centers for children, and is currently the only true orphanage.  There is also Happyland and Dreamland, both of which are still being developed and are currently functioning as community centers for local kids.

I thought that Fate, Destiny, and Serendipity had all intervened to place that bottle in my line of vision.  For days I had been meaning to research volunteer opportunities in Cambodia, and now one had come to me… literally washing ashore at my feet.  The Universe is calling me, I thought.  So, I shot off a quick email to Mr. Kim and within a few hours had organized my stay at CPOC.  I was soooooooo excited.

But things don’t always go according to plan, do they?

The first thing that went wrong was the ride out to the CPOC center.  It was organized for me by Mr. Kim. I was picked up at my hostel in Phnom Penh by a tuk tuk driver and dropped off at an outdoor market where I was transferred to a “minibus”, which is really just a 15-passenger van… except that they forcibly loaded 27 people (25 adults and two children) into it.  Being one of the last five people to get in, I didn’t have a proper seat and was squished in, onto a bench, with bodies touching mine on all four sides, like a can of sardines.  Every time they opened the door to let another passenger in, I thought to myself, “Oh my god.  I cannot do this.  I have to get out.”  But I didn’t. I don’t know why I didn’t get out (and I wish I had), but I just endured. Of course there was no air con in the van, and it was about 95 degrees that day.  We constantly stopped to drop people off, which meant that I had to get out of the van and the van crew had to unload EVERYTHING from the back of the van (which was roped shut because it was overflowing with everyone’s bags, goods, etc) and then reload everything and everyone back into the van.  The town where I was dropped off, near Takeo, is 81 kilometers (about 50 miles) from Phnom Penh.  It took 3.5 hours to get there… 3.5 excruciatingly long, hot, sweaty, cramped, miserable hours. 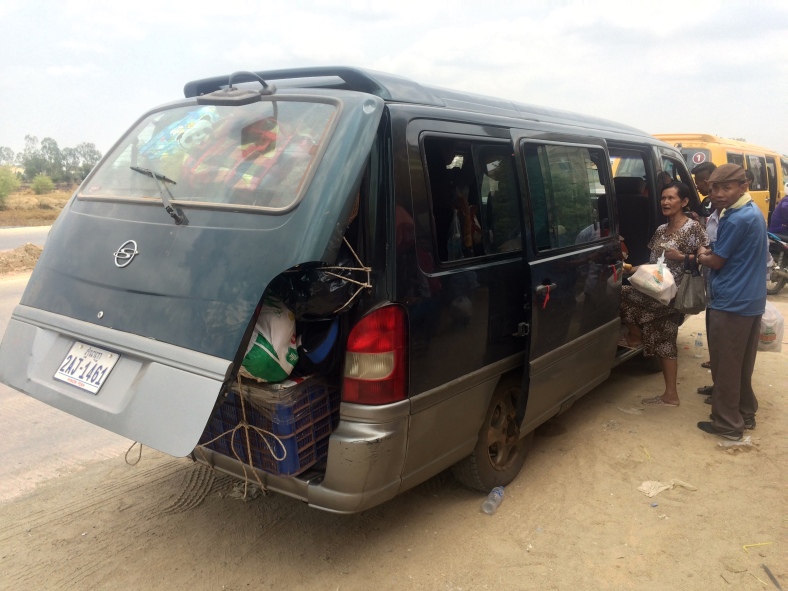 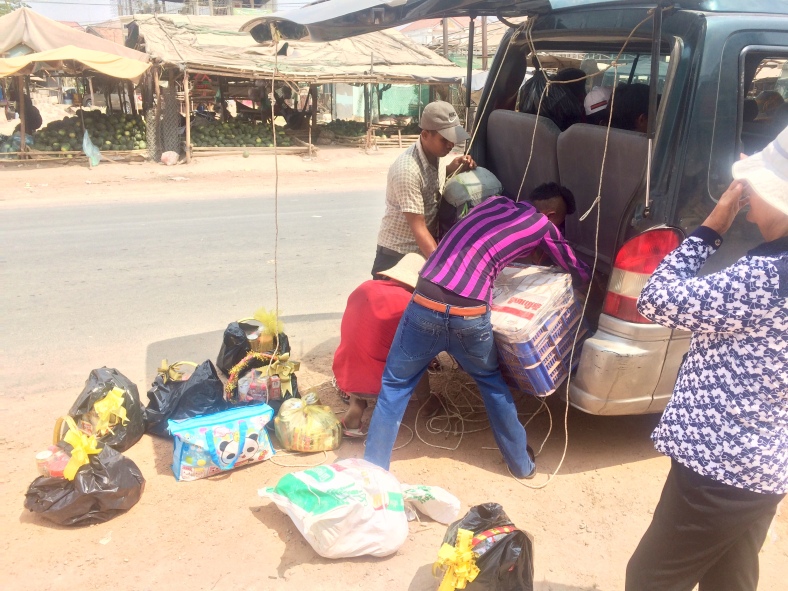 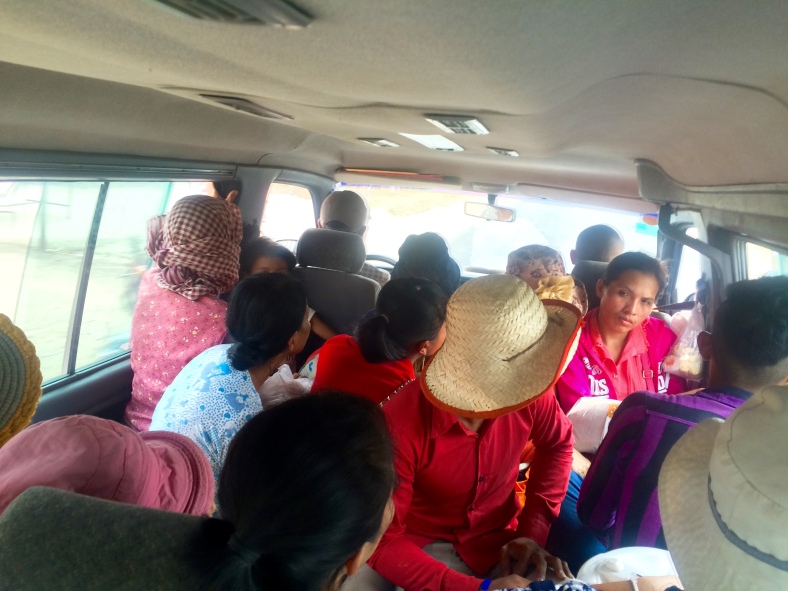 At this point, the van was carrying 23 passengers

But I finally arrived and was greeted by three other volunteers: one who had just arrived an hour before me (in a similarly over-packed van), and two long-term volunteers who had been there for a couple months or more.  They were from the Netherlands, England, and Malta.  Within an hour I found out several crucial pieces of information that made it even more clear that I should have gotten out of the van back in Phnom Penh. 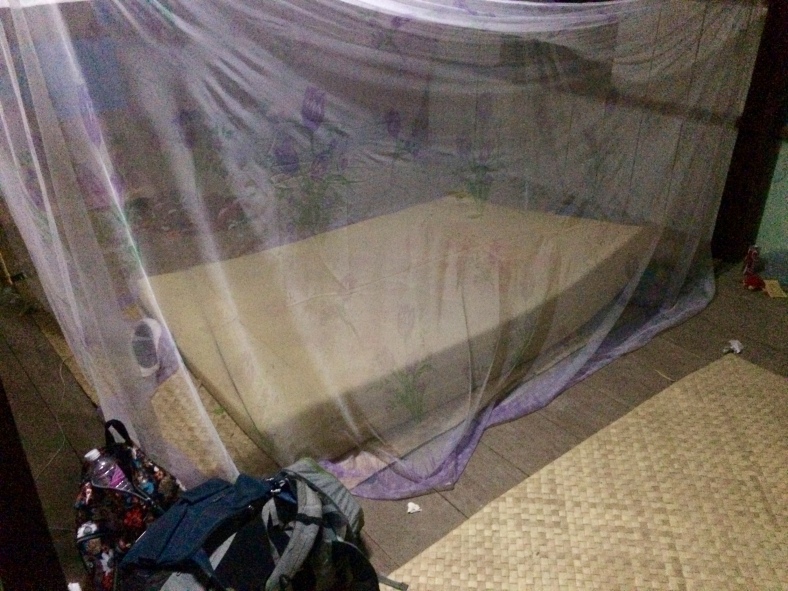 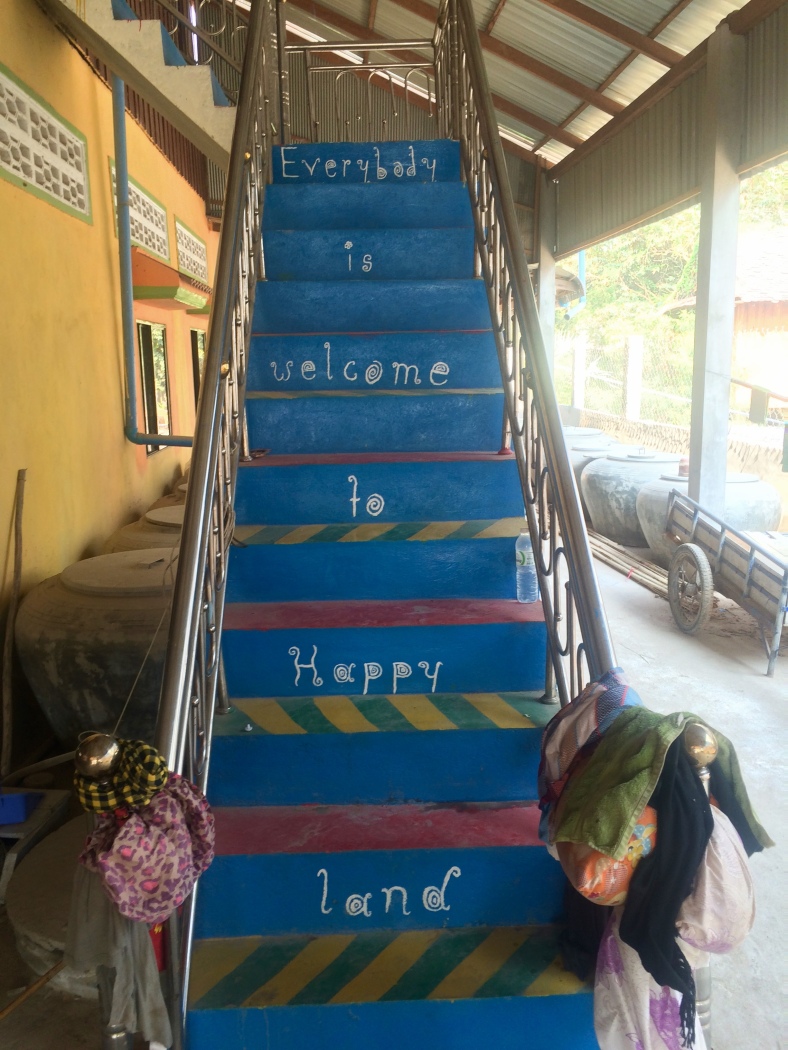 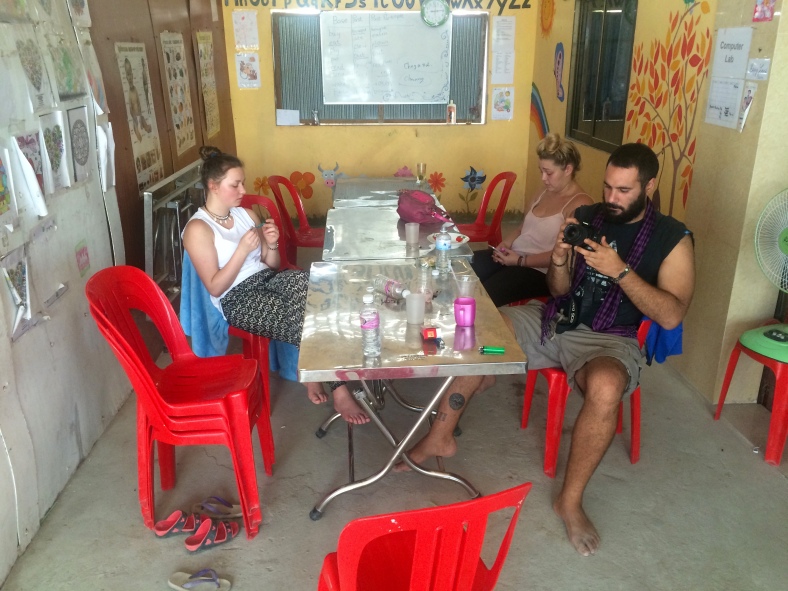 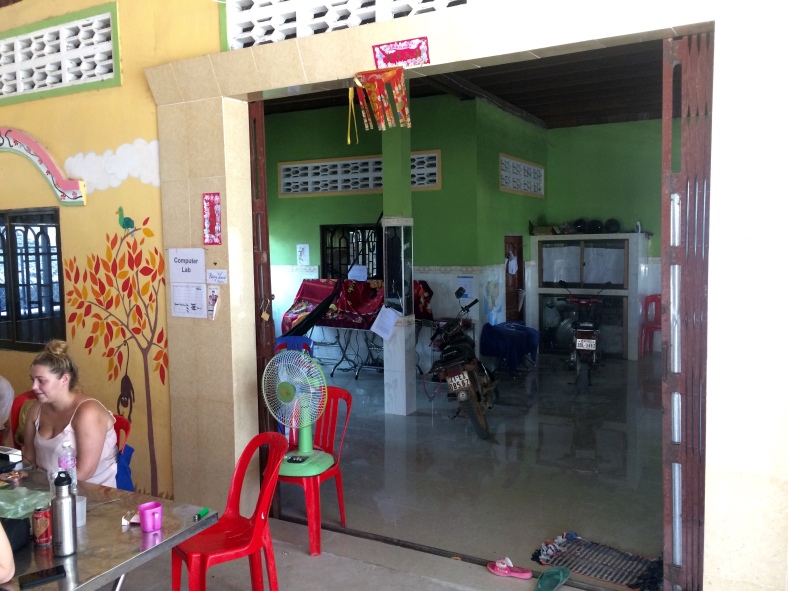 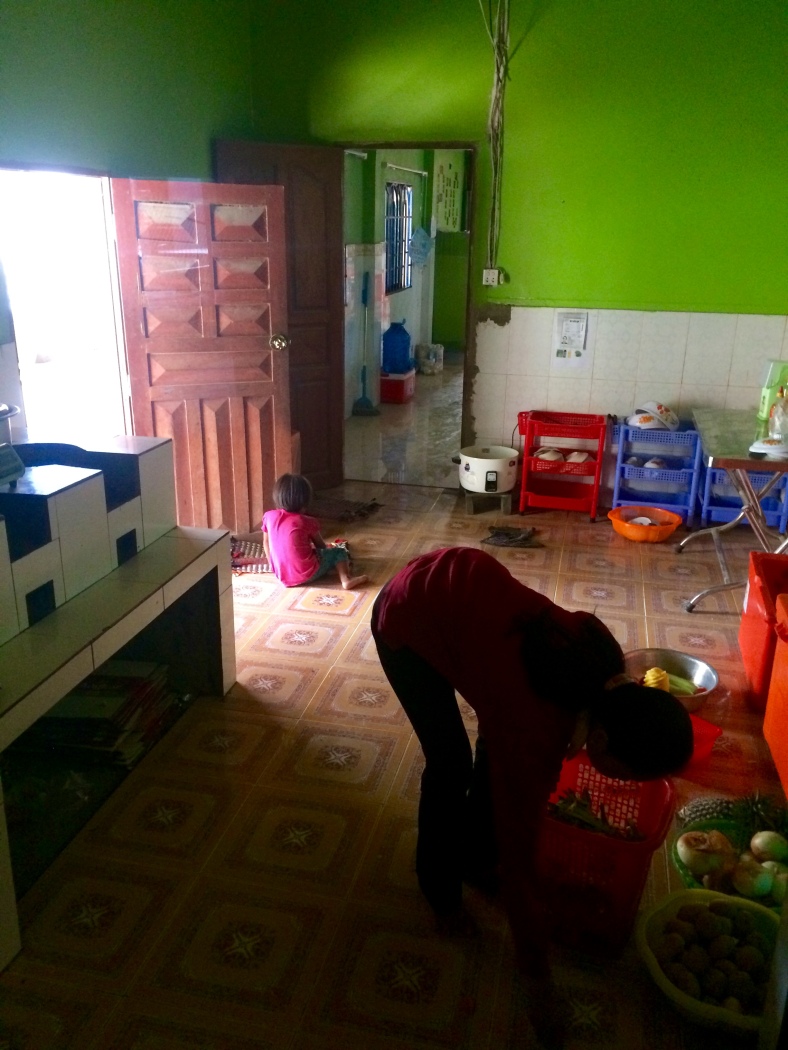 I stayed only two days.  So, I don’t want to jump to conclusions and judge the Happyland CPOC center based on what I experienced because I truly believe (and hope) that it wasn’t typical considering the holidays.  So, being as objective as possible, this is what I experienced:
The local kids: coming and going, watching movies, playing ball, hitting or slapping the volunteers, hitting each other, asking for food, sitting on laps, seeking positive and negative attention from the adults, speaking a mix of Khmer and English.  Their curiosity for the newcomers (me and the Dutch girl) was limited to, “What your name? How old? Are you married? Do you have a boyfriend?” However, it was obvious that they had built relationships with the long-term volunteers.  I’m sure if I had stayed longer, the children would have opened up more.
The volunteers: sitting around doing nothing, chain smoking, watching movies, hanging out with the kids, playing ball with the kids, basic upkeep of the center, taking a trip to the local market for groceries, playing games. 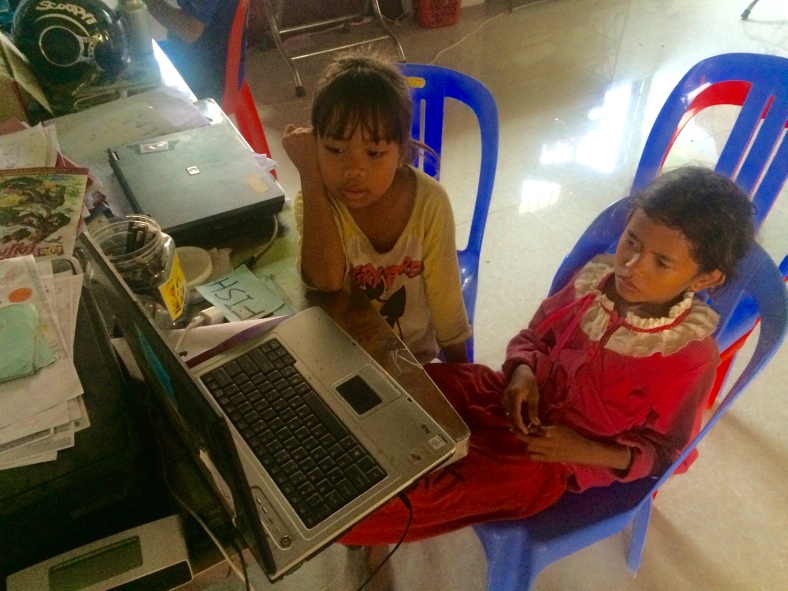 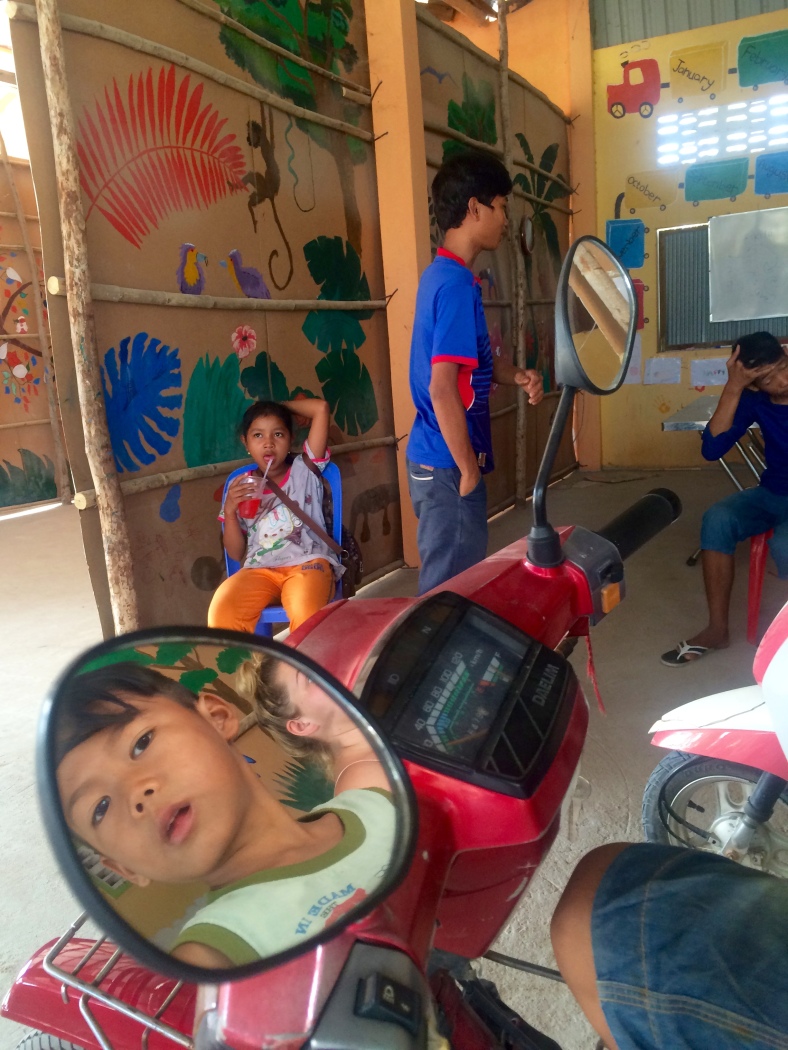 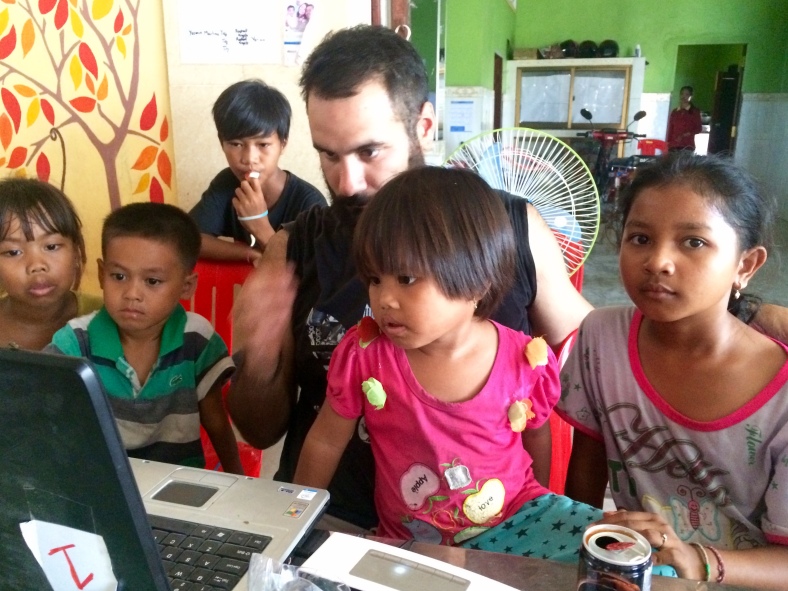 Kids and volunteer watching another movie 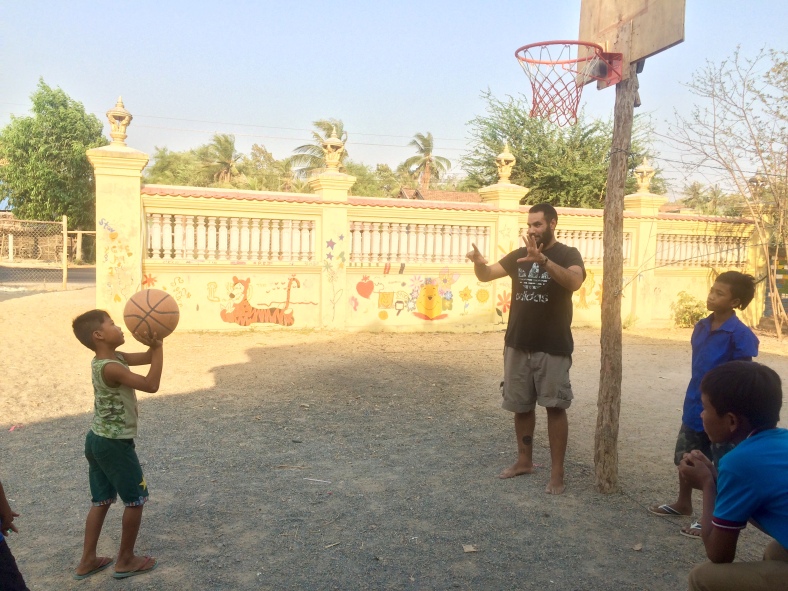 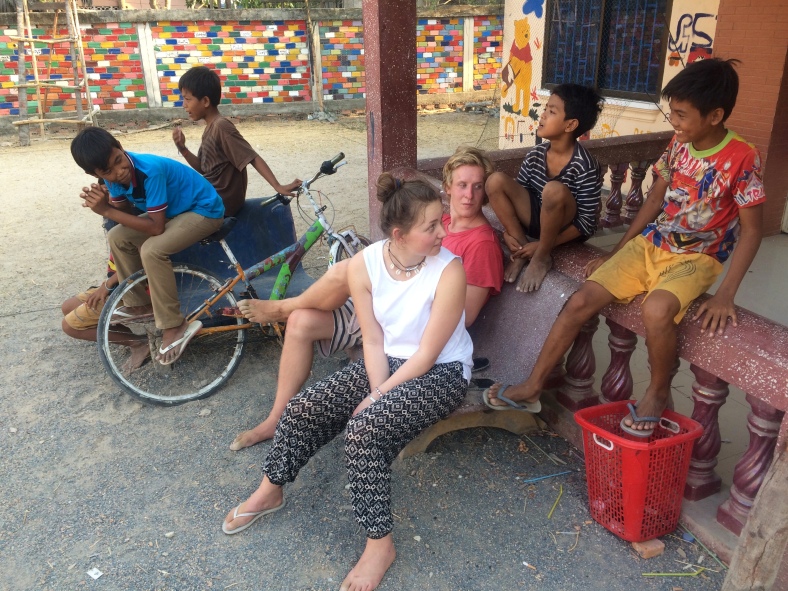 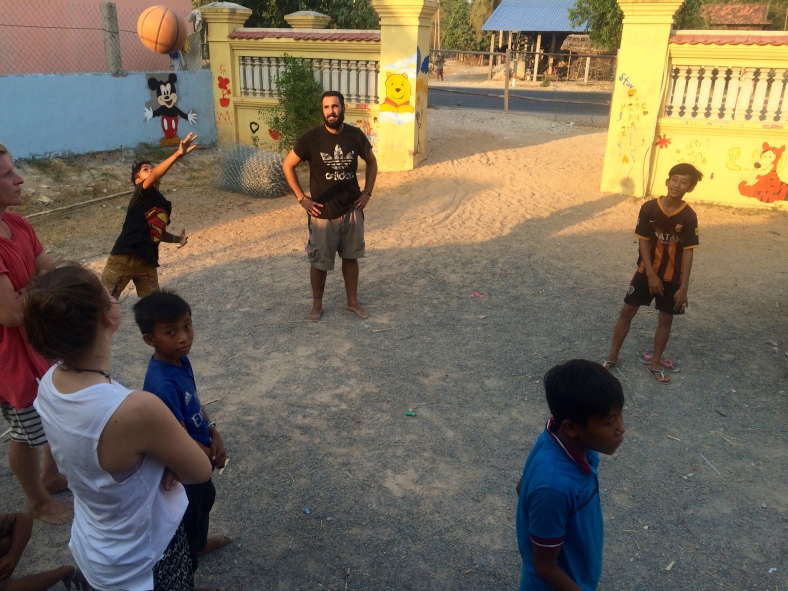 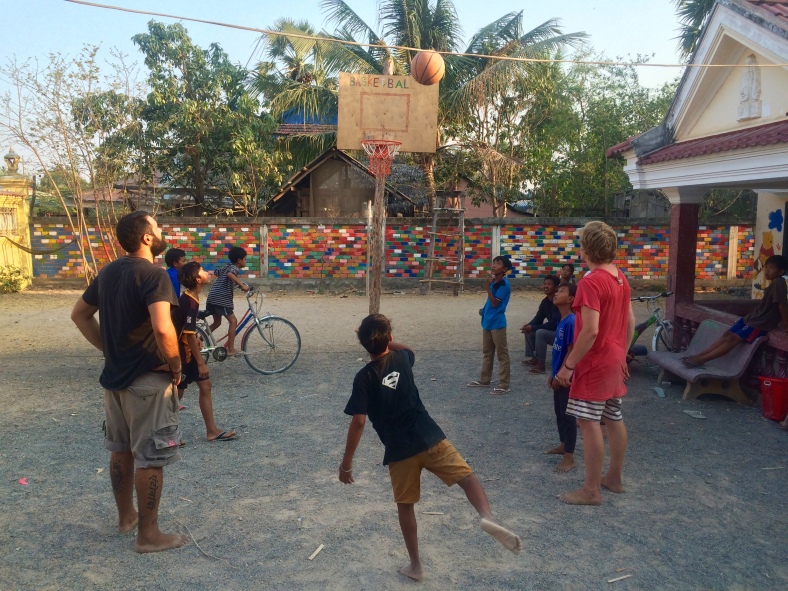 I also met Mr. Kim on my second afternoon there.  If you read the reviews about CPOC and Mr. Kim online, people absolutely rave about how inspiring and amazing a man he is.  But this is what I experienced:
He showed up on a scooter (with a driver because he’s physically disabled), sat at the table with us, had a few brief conversations with some of us, got on his phone a lot, and left.  There was no “Welcome to CPOC!  Thank you so much for volunteering! Let me tell you a little about our foundation and its programs/what we’re working toward…”  It was very underwhelming.
That same day, the power was out from 10am until 6pm.  I’m pretty sure I lost five pounds of water weight that day.
On the plus side, it was free (well, $3/night, but that included meals, so basically free). I learned a few things about Cambodian culture and its rural children (they have hard lives; they need positive role models; they live in extreme poverty; alcoholism and HIV are epidemics). And I had to practice things I’m not very good at, such as patience, biting my tongue, and enduring physical discomfort.
After two days there, I knew I needed to leave.  I woke up on Monday morning, ate a scoop of peanut butter, brushed my teeth, and caught the next minibus out of there.  (This minibus carried only 7 people and a baby, but the seats were removed to make room for dozens of bags of flour on which we all sat). 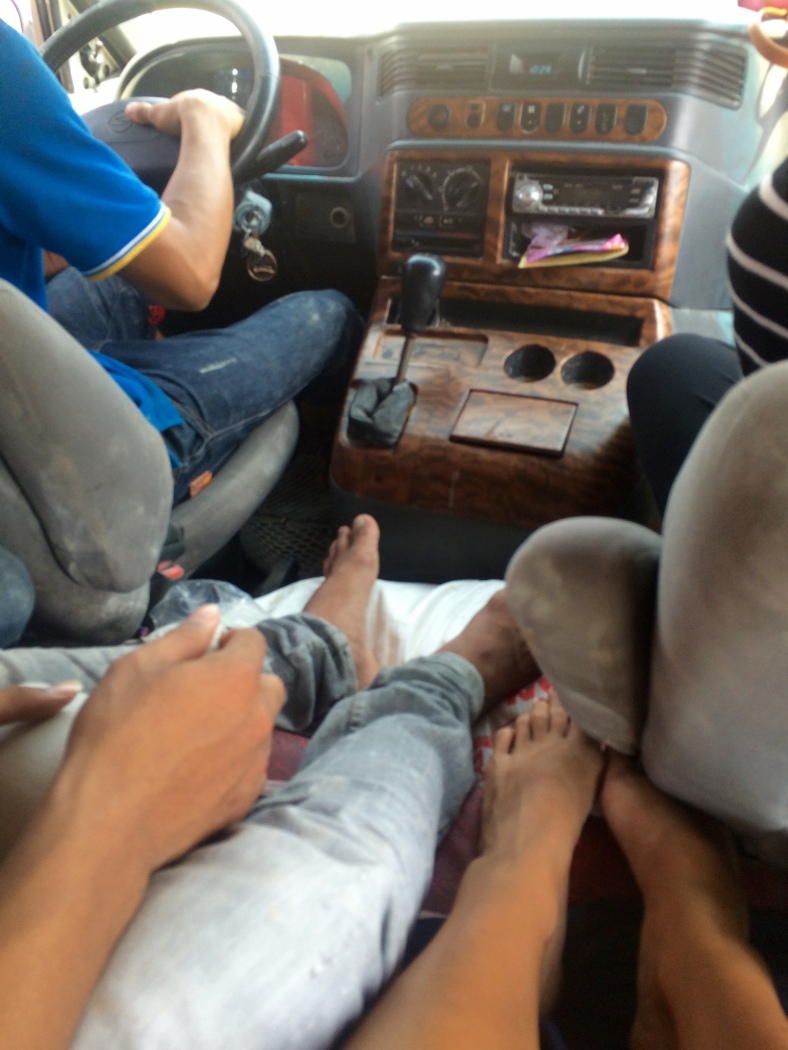 Sitting on sacks of flour 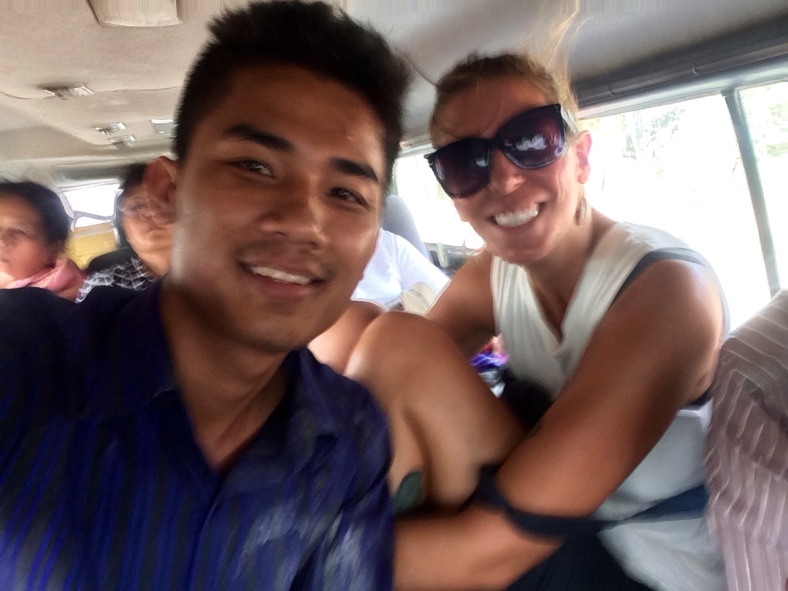 Am I glad I went?  I don’t know.  Would I do it again? Not under the same circumstances. But perhaps some day, in my future life, I will return to CPOC and have a more positive experience.  I believe the potential is there.