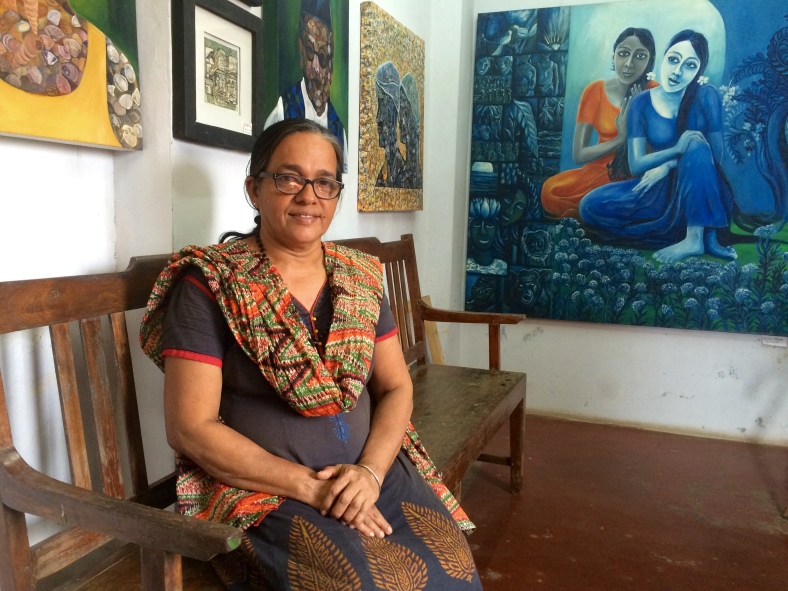 The other day I was roaming around Fort Kochi when I popped into a tiny art gallery and met Victoria.  Victoria was the artist of all the paintings and owner of the gallery.  I never got her age, but I imagine she is in her late 50s or early 60s. She introduced herself and immediately invited me to sit down and join her for a cup of chai and medu vada (a savory South-Indian snack that is made out of lentils and looks like a doughnut).
We talked for about 45 minutes, mostly about her artwork.  She showed me a book that she had made of at least 25 pieces of her art, paintings and poetry. As I learned more about her art, I learned more about Victoria.  And as I learned more about Victoria, I learned more about Indian culture.
When Victoria was a child, she started writing stories.  The stories were personal and reflective. She wrote about a father who was an abusive drunk who one day fell over, lost his glasses, and a piece of shattered glass poked him in the eye, blinding him.  Apparently, one day Victoria’s mother read these stories to her friend.  They were laughing about them, and the mom’s friend started asking Victoria questions.  That day Victoria decided she would no longer write, so instead she started painting.
Just like her writing, Victoria’s paintings tell a story.  I asked her about the largest painting she had in her gallery.  She said it was about friendship, but it really wasn’t about friendship at all.  The more she told me about the painting, the more I realized that it was about loss.
The painting depicts two women sitting together, but on the edges of the painting lie the real story, which is about arranged marriage.  Victoria started telling me about her own arranged marriage, which I’m certain is a similar story for every Indian girl with the same lot in life.
From what I understand, this is how arranged marriage works:   A man and a woman (or, more frequently, a boy and a girl) are paired up by their parents, who use a formula based on caste and horoscope to deem the pair a good match.  If they are young when the marriage is arranged, years can pass before the actual marriage.  If they are older, less time.
Once they are married, the girl must leave her family and friends (and sometimes her village, town, city, and even state) to go live with the boy’s family.  She must integrate herself into his world, and it is important that she please the mother-in-law since she is now living under her roof.  She might even have to learn a new language, as there are more than 200 languages spoken in India.  This system is fantastic for men in this chauvinistic society.  Once married, the man has both his mother AND his wife taking care of his every need!
Let’s just pause here for a moment and put this into perspective:  Ladies, imagine that upon marrying your boyfriend/husband, you have to move to his hometown and live in the same house as his family and do what his mother tells you to do.  Oh, the horror!
But it goes even deeper than that.  In an arranged marriage, the girl might have only met the boy and his family once or twice before the wedding, so they are practically strangers.  So, here’s the bride, in a new home with people she doesn’t really know (people who may or may not be welcoming and kind), away from everyone she loves, and she has no choice but to do what’s expected of her.  Divorce is extremely rare because divorced women are considered social outcasts.  I read something recently about a horrifying practice called “bride burning”, which is when a wife is doused in flammable liquid (often kerosene) and then lit on fire.  Bride burning (also called dowry death) happens when the husband and/or his family is not happy with the wife and/or her family because they are not giving the husband’s family what they want, such as money, expensive gifts, a son, etc.  It happens after the marriage is finalized because, again, divorce is so taboo.  According to this fascinating and disturbing article written last year, bride burning accounts for the death of more than 8,000 Indian women each year and it’s on the rise.
(http://www.smh.com.au/world/india-burning-brides-and-ancient-practice-is-on-the-rise-20150115-12r4j1.html)
But Indian marriages are not all negative.  Although 90% of Indian marriages are arranged, there are also love marriages (that is the actual terminology for what we just call “marriage”).  My dear couchsurfing friends in Mumbai, Sushim and Nupur, have a love marriage and their relationship seems no different than any relationship I’ve experienced.  They live together in their own apartment, not with Sushim’s family.  They have mutual love and respect for each other.  They both work outside the home.  Neither one seems to be the boss of the other.  And Nupur’s family did not pay a dowry to Sushim’s family.  But they are the exception and not the rule here in India.
As a traveler and a lover of the world, I try to avoid judging a culture by one of it’s idiosyncrasies.  Actually, I tend to think more highly of other cultures than I do of my own.  But in this case, I have to say that I am exceptionally grateful to be from a country where it is common practice to marry whomever you choose, and if you’re not safe in that marriage, you can divorce without the fear of being deemed unlovable.
Although Victoria did not say outright that she was unhappy in her arranged marriage, she did say that it has been very difficult for her.  After more than 30 years of marriage and two children, she is still painting and writing poetry about the hardships of it all: the loss, the sadness, the stress, the loneliness.  Art is her outlet.  But what about all the other women?  How do they cope?

Victoria and her paintings